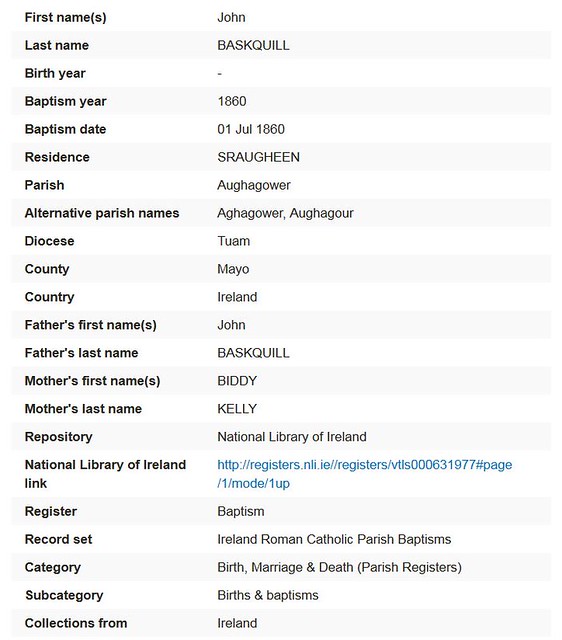 Index page from Findmypast for the above image

As I’ve searched through the Catholic Parish register indexes at Findmypast, I’ve been submitting corrections. I do the same thing at Ancestry. Ancestry can take months to update their indexes, if they do at all. I had no idea what time-frame to expect from Findmypast, but I was shocked to see that corrections I filed just a few days ago have already gone live. You can see them in the above screenshot.

The last name in the index was spelled Bashguill. Somebody consistently had trouble with the “q” in the name, transcribing it as a “g.” Mistaking the “k” for an “h” was maybe a little more forgivable? I have the advantage of having worked with this name for years, so I’ve seen it all. Some day I’ll compile a list of all the different spellings I’ve seen.[1]

As well, John’s mother’s name was transcribed as Bridgt Kely. It’s clearly Biddy Kelly. It may not make a big difference in the long run, as Bridgt and Biddy are an abbreviation and variant of Bridget. At Findmypast, they do a good job of cross-referencing, if you check the name variants box. People would probably find the mis-transcribed record, if they search carefully, but better to make it right, right?

I am also adding townlands, where they’re recorded in the original record. I figure I may as well, since I’ve got the edit screen open and the image right in front of me. John was born in Shraugheen, which is an old variant spelling of Sraheen. The townlands are indispensable in determining who’s who. (Do you have any idea how many John Basquills there are?!)

You can see the fields I edited, because they’re in all caps. Kind of fabulous, I think. And unlike corrections filed at Ancestry, where I sometimes feel like they disappear into the void, this was timely positive reinforcement from Findmypast.

____________________________________
1. I laugh when people in my genealogy groups talk about how they diligently add every spelling variant they encounter as an AKA. I’d have 30 AKAs for each person, if I did that, and my name index would be ridiculous. I record the name variants in the source citation, where I transcribe the record fully. That is going to have to be good enough.

It must be nice to only have one or two common name variants.