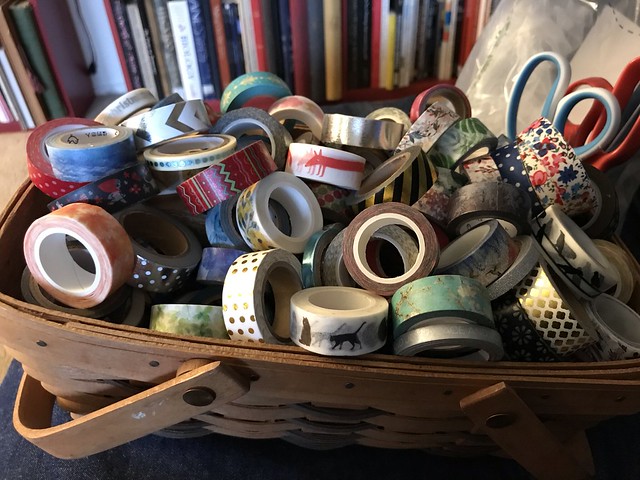 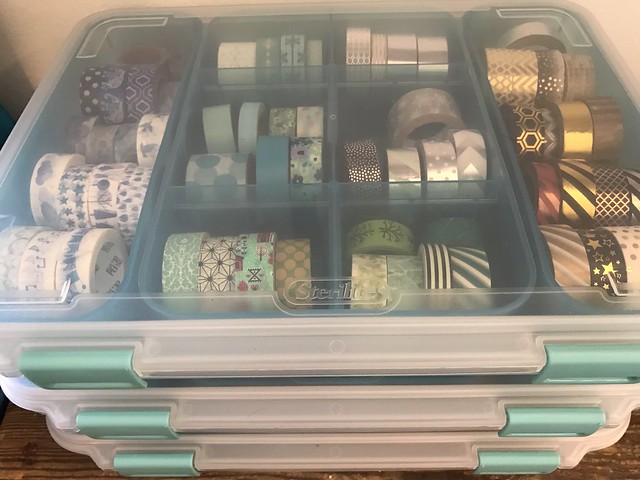 I may or may not have a washi tape hoarding problem. At least it’s organized now.

Moving the Furniture Around 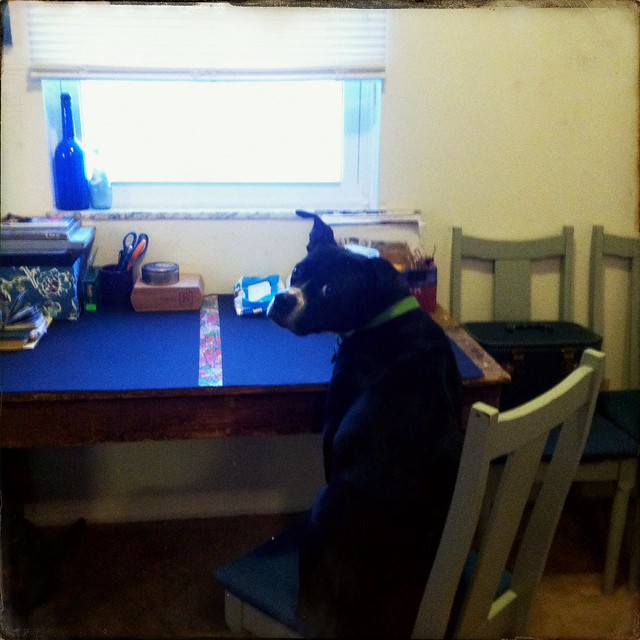 Cabin fever won out, so I rearranged furniture. The unused, wasted dining room is now art space. It involved removing and rehanging a door and trading the round dining table for my old primitive farm table. 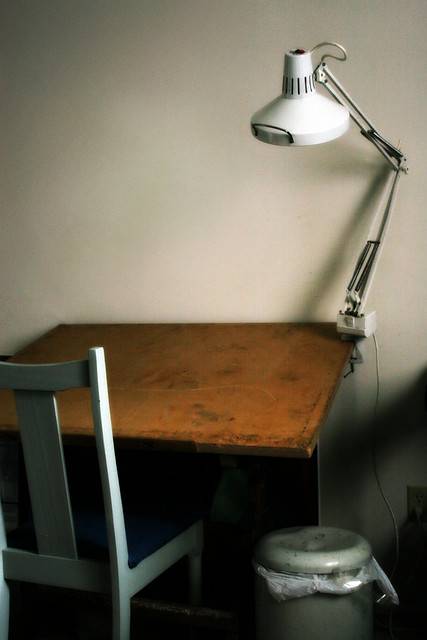 I spent weeks getting rid of junk, so of course when I visited my mom over Memorial Day weekend, she sent me home with more stuff. Cool stuff, though! The drawing table has a cast iron base. At some point someone used double sided carpet tape to secure a self-healing cutting mat to the top, so I need to go over it with goo remover to get rid of the adhesive residue. Other than that, it’s in good antique shape.

The clamp light was a bonus. 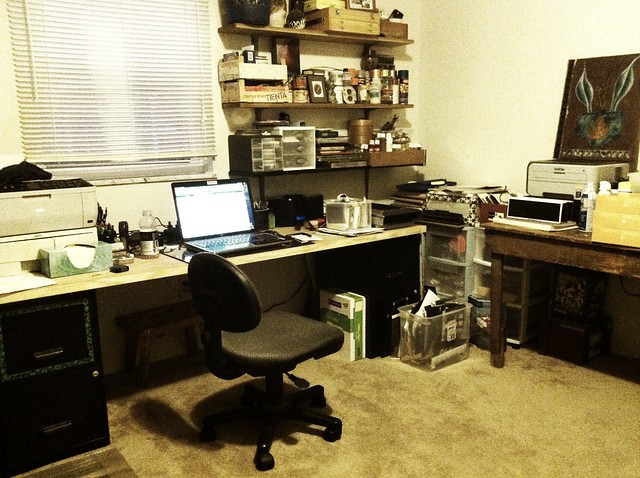 I spent the last couple of weekends cleaning and rearranging the studio. In the process, I hid some stuff from myself that I needed for scanning negatives. Oopsie! But, it’s clean. Or, as clean as it’s ever going to be. And, I found the missing scanner parts this evening, so all is not lost. (I tried to get Henry to model for me, because she’s been crawling all over everything and annoying the crap out of me, but as soon as the camera came out she vanished. Useless jerk.) 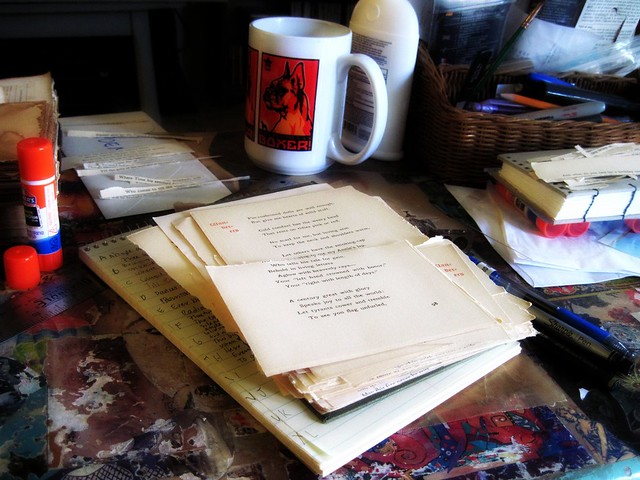 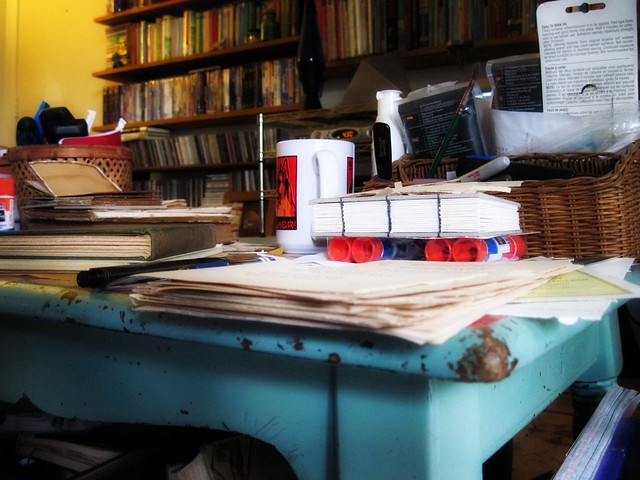 Once upon a time, this was a freshly painted coffee table with pristine collage work covering the top. And then I started using it as a workbench.

I finished working in one book a few days ago and started on another last night. It’s an ABC book of found poem fragments and collage. The poetry is going slowly, but I’m up to G. Hopefully I’ll get the finished pages scanned tonight or tomorrow. And now I’m off to scrounge up a suitably celestial image. 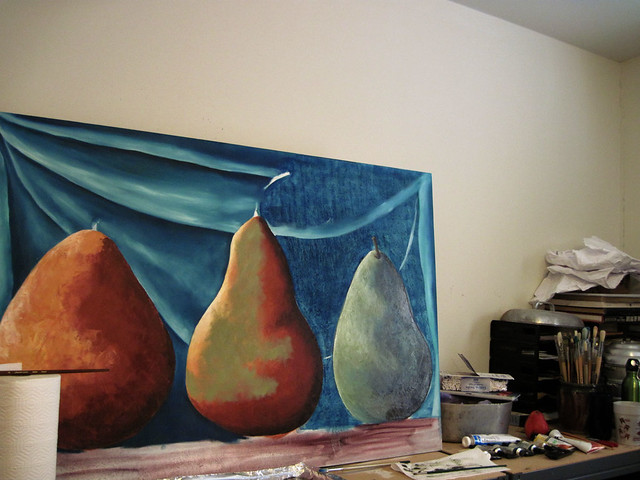 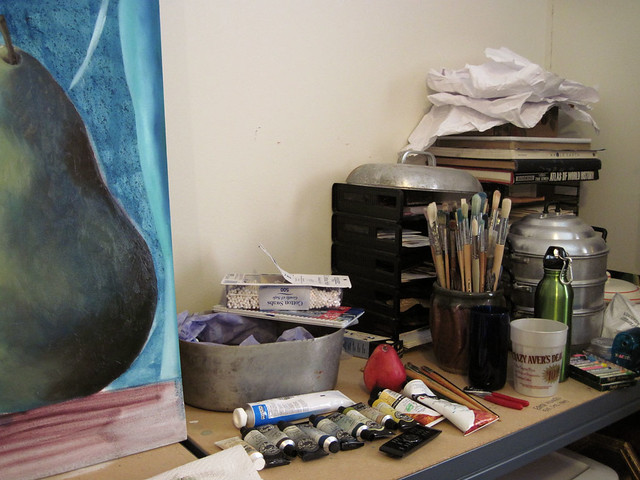 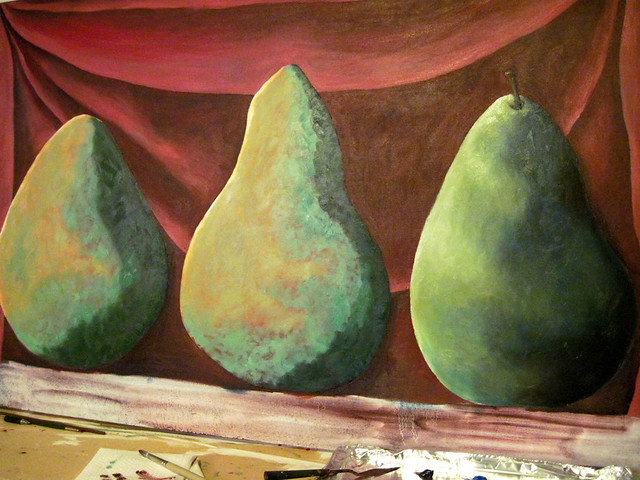 It’s taking forever, now that I’m working on this one again, but it’s a ginormous painting, so I guess that’s to be expected. 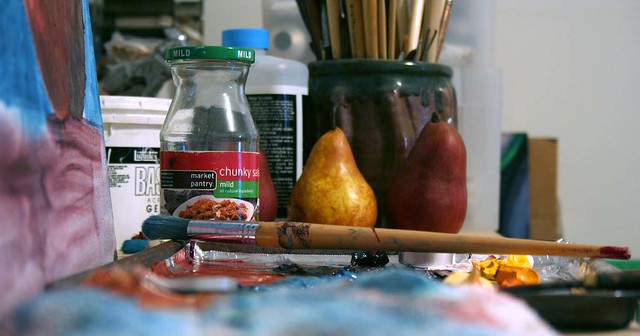 Yes, I’m still painting behemoth pears. Someone in one of the Canon DLSR groups recommended using the timer to take low light photos, so I gave it a try. Huzzah! Today’s photo is much sharper than yesterday’s. There’s still a little bit of shake, from the mirror moving out of the way, but I think there’s a way to lock the mirror. I intend to investigate that this weekend.

Since I’m completely clueless about photography, I’ve been reading up on the basics. Aieee! Physics has never been my strong suit, especially optics, so this stuff is not intuitive to me. It’s going to take awhile before it starts to sink in. 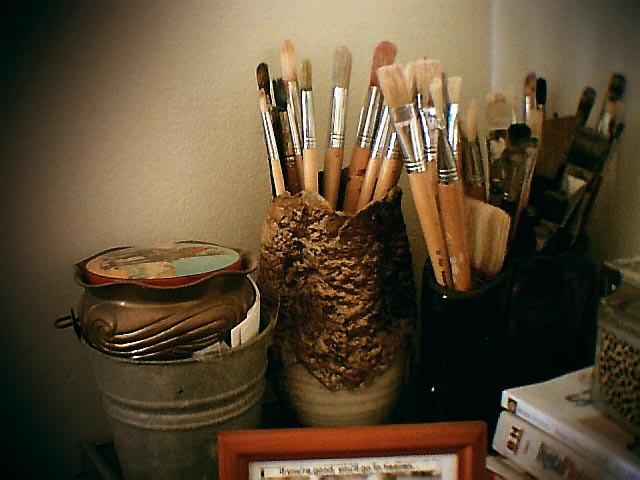 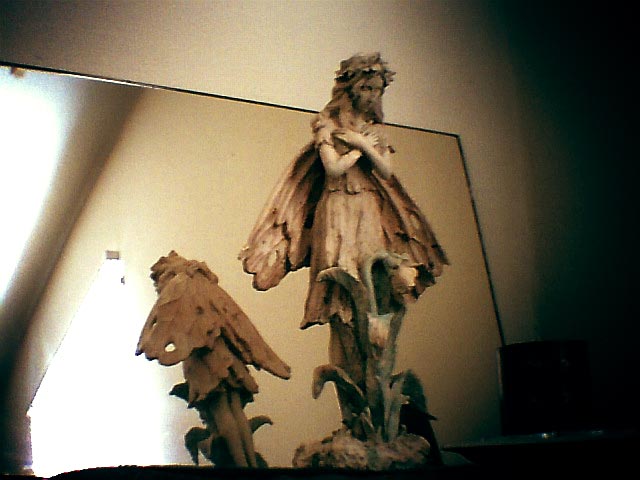 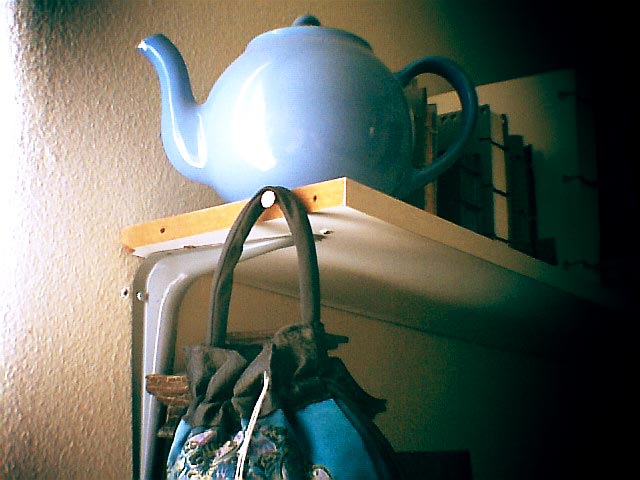 I think the failure message I keep getting has nothing to do with the camera itself. I tried restarting my computer, with the camera powered on and connected, and it worked just fine. The same thing happens with my scanner (if I turn it on after the computer is powered up, the scanner isn’t recognized). This is a recent-ish issue that coincided with the installation of Zone Alarm. I suspect ZA is interfering with my USB ports, which is annoying as all hell but makes a certain amount of sense. 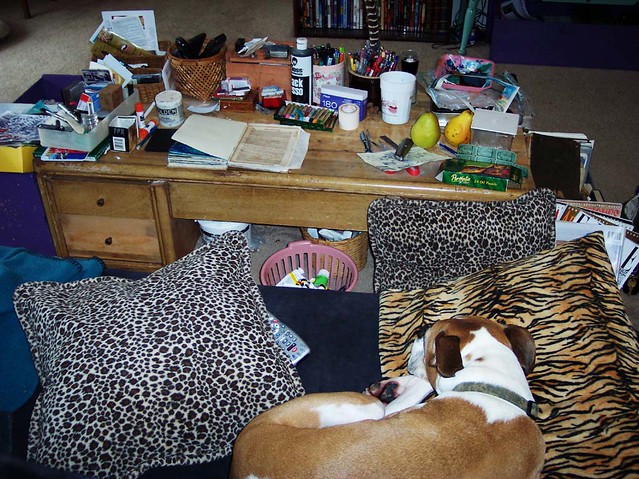 My messy coffee table slash work bench. It used to be a desk, but I took the legs off and turned it into a coffee table. It weighs about a million pounds and is really beat up, but it’s functional and I don’t have to worry about trashing it because, hey, it’s already trashed. 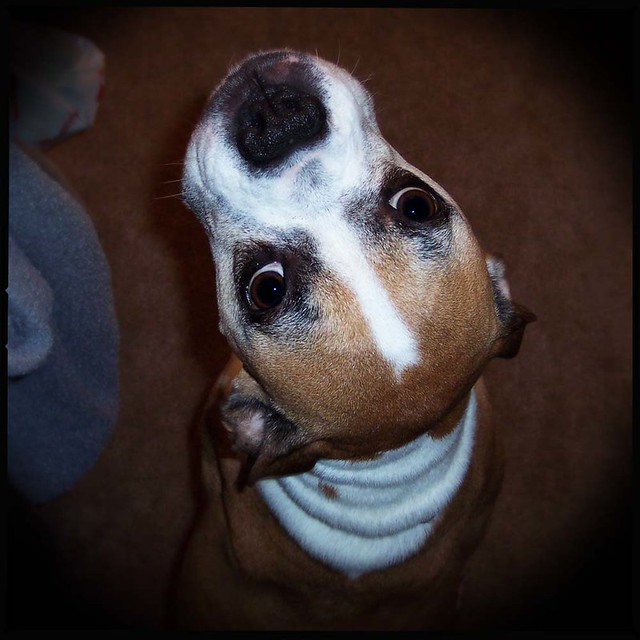 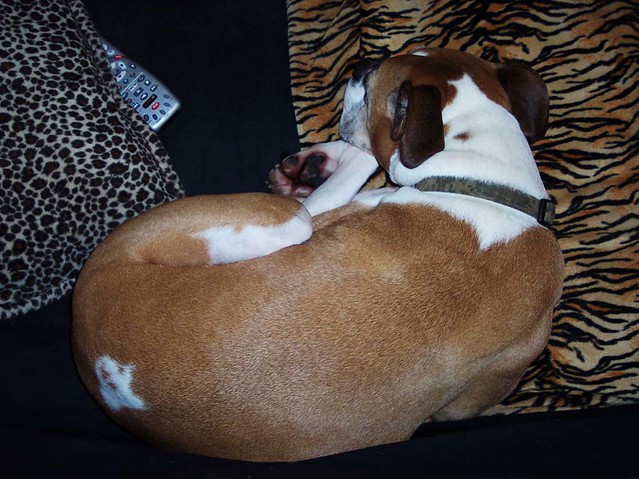 It sleeted, iced, and snowed last night. This morning, there was just a thin film of snow on the patio, so it doesn’t seem to have amounted to much. Right now, I can hear water dripping outside, so it must have warmed up. I should go out and clear the little bit of snow that’s left on my car’s windshield and front bumper, but I’m not feeling too motivated in that direction. Maybe I’ll do it when I check the mail.