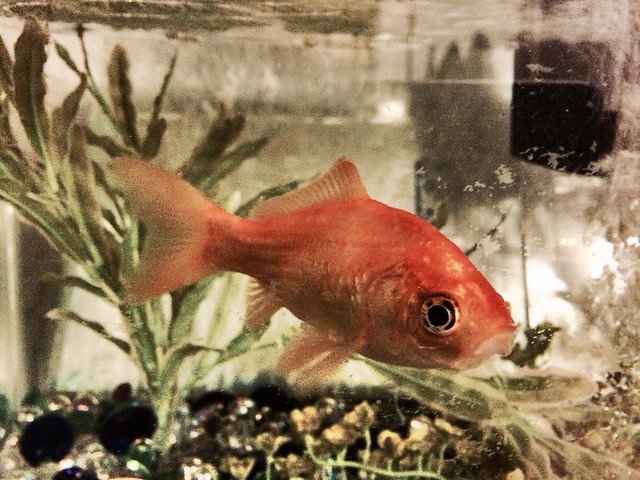 One of my fish died a few days ago. I feel badly for the remaining fish. He seems fine, but they were clearly very attached to each other. They swam the tank, side by side, like they were attached at their little fishy hips. 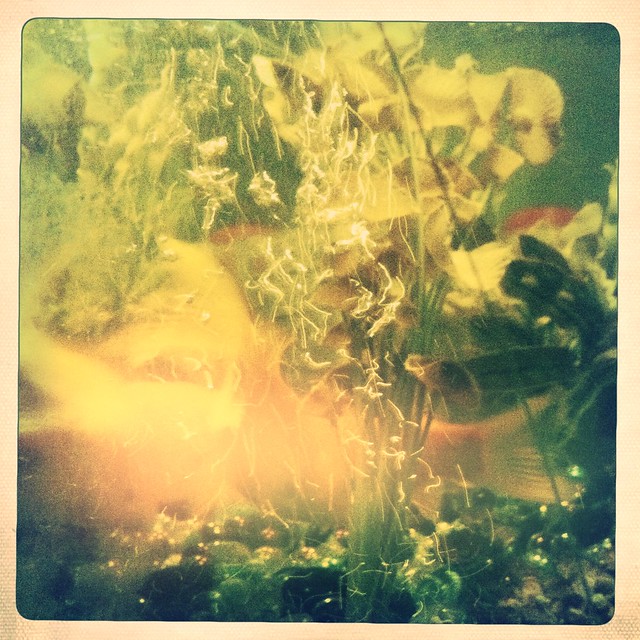 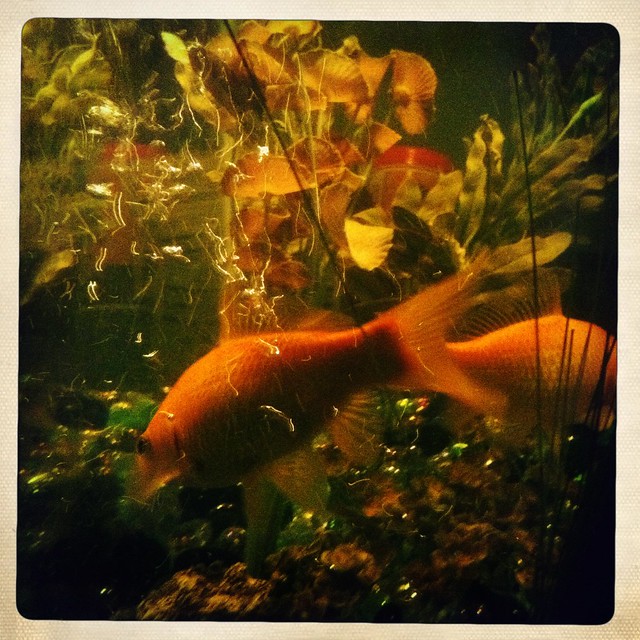 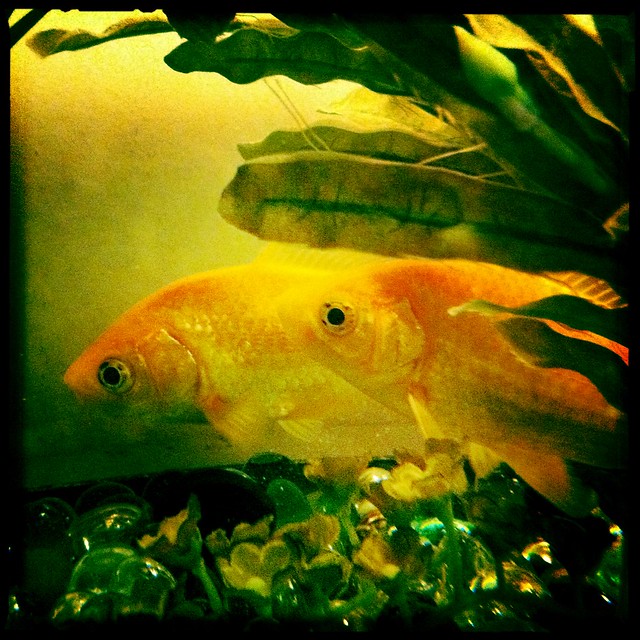 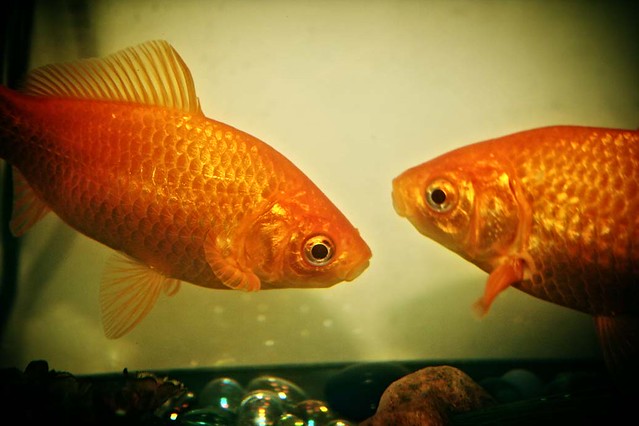 My aquarium had a horrible algae bloom over the summer, which turned the water dark green. Not very nice! It’s pretty well cleared up now, and the fish seem happy. They’re fun to watch (when the water isn’t too cloudy), because they are pretty much joined at the fin. They’re almost always right next to each other, whether they’re cruising around the tank or digging in the rocks for leftovers. When I get up in the mornings, they’re usually resting under one of the plants, side by side and head to tail.

I got a plecostomus last summer, because algae was building up in my goldfish tank. He’s been a funny little fish. I noticed a few months ago that he was coming up to the surface and stealing the leftover floating pellets I give the other fish. The pellets end up along the edge of the tank, at the water line. Mr. Pleco hoists himself up, so his head is above the water line, then gets the pellet in his mouth and ever so carefully scoots down the glass. Because his mouth is on the bottom of his body, it can be tricky for him to keep the pellet from escaping and floating back to the surface. When that happens–and it does at least once every time–Mr. Pleco has to swim to the top of the tank and start all over again.

And now, Mr. Pleco has a new trick. Last night, at their bedtime feeding, I noticed that he was scooting around the tank upside down. He was actually lying on his back, hoovering goldfish flakes off the surface of the water. What a clever and resourceful little guy! I really should try to get video of it, because it’s a hoot.

Spotty is spotty no more. I noticed this morning that his last two burned scales are back to their proper orange color.

I also noticed that I have acquired an astonishing pile of fishy accouterments. Everything from medicine to tank clarifier to stress coat to 101 different types of food. All for two silly goldfish and their pet pleco.

And speaking of Mr. Pleco, he’s a total riot. Whenever I give him an algae tablet, the other fish try to take it away. He’s no dummy, though. He lays down on top of it while he nomnomnomnomnoms, so that they can’t get to it. And watching him clean the algae from above the water line is hilarious, too. He suckers himself to the side of the tank, then shimmies up until his head is just above the water, then he scrubs furiously until he has to go back under.

1. Spotty fish is very nearly completely unspotty. All the ammonia burns are gone, except for a small patch of about five scales on his side. That will be gone soon, too, and I will be back to not being able to tell Fish One from Fish Two.

2. Harriet’s lump removal surgery is scheduled for September 9th. I was afraid that I’d have to talk them into doing the surgery, because the vet seemed hesitant. Apparently she took my concerns about it bothering Harriet seriously, though, because she put a note on Harriet’s chart, recommending that it be done.

I went out this morning to pick up a package of algae wafers for my pleco. He’s pretty much cleaned the tank, so it was time to get him some real food. As I was opening the package, both goldfish did their “OMG I’m starving!” dance at the front of the tank. Very cute, and a very welcome sight after how sick they’ve been. I dropped an algae wafer into the tank, and both goldfish attacked it. It was gone in about 15 minutes.

Hopefully the novelty will wear off soon, because the poor little pleco didn’t get a single bite of algae. He saw the wafer and got as close as he dared while the big fish were eating, but I suspect he didn’t want to challenge them. 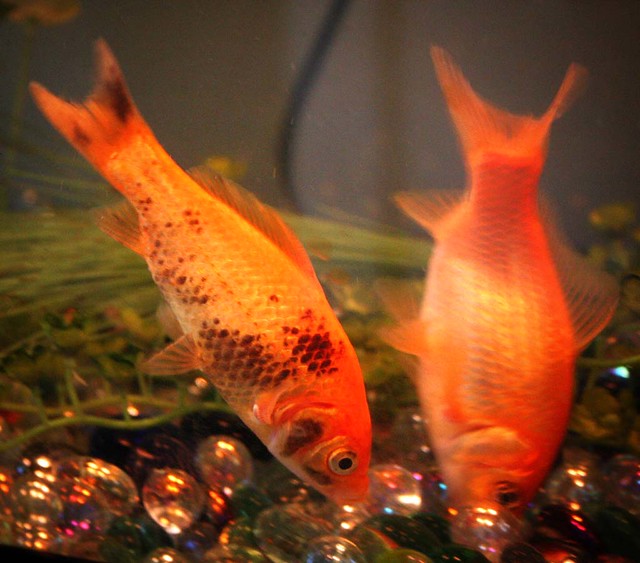 Don’t ever let anyone tell you that fish are unthinking or unfeeling creatures. I’ve watched these guys swim their tank together. I’ve seen how they sleep next to each other, touching. I’ve seen the healthy fish gently rest his “chin” against Spotty, looking for all the world like he’s trying to comfort him. Earlier today, I watched as he bullied Spotty into swimming around with him for awhile.

And just now, I heard the sound of clinking glass. I went to check on them, and they were both head-down, searching for left-overs among the marbles at the bottom of their tank. Spotty is eating again.

I did several ich treatments, but one fish still has a few white spots on his tail. Not good. I had to stop, though, because the affected fish started developing black scales. At first, I thought it might be black ich (another parasite), but it doesn’t look at all like that. It looks like ammonia burns, and the symptoms match. He’s lethargic, “panting,” and won’t eat. He just sits at the bottom of the tank.

The other fish, bless his heart, hangs out with the sick one. He occasionally rests his “chin” on the sick fish, in a way that looks for all the world like he’s trying to comfort him. These guys have been joined at the proverbial hip since day one. They swim the tank next to each other, and when they sleep, they’re usually touching. I don’t want to guess what goes on in little fishy brains, but they seem to be deeply bonded.

As far as the ammonia burns, it looks like there’s not a whole lot I can do, besides stop feeding, add some salt to the water, and do a 1/4 tank change every day. It’s strictly wait-and-see. I should remove the sick fish to another tank, since he’s still got a couple of white spots on his tail, but I’m not going to, because I don’t want to stress him further. Maybe if the two goldfish weren’t so attached to each other, it would be different.