Mallory Ortberg hits it out of the park again. Of course.

Excuse me, hello, art? I will be requiring the permanent ownering of these dogs posthastely.

Source: Dogs I Would Like To Own In Art

from the desk of…

I love looking at other people’s creative spaces, especially their desks, so I spent quite awhile this evening wasting time poking around the from the desk of… blog (via boing Boing).

And speaking of time wasters, have I mentioned the hippy kitchens tumbler? There are some pretty fabulous photos there.

I like to check out Apartment Therapy and its spin-off sites. The comments threads are usually interesting, though there are some regulars who seem to have no social skills or manners whatsoever. I find that a little difficult to deal with, but what really boggles my mind is the folks who seem to be devoid of reading comprehension or critical thinking skills.

One of the subjects that, unsurprisingly, comes up fairly often is color. What color should I paint my living room? or What is the brand and name of the paint you used in your kitchen?. Do these people not realize that the color they’re seeing on their monitors is likely not the same as the color the decorator or photographer saw on hers? And even assuming that the camera and everyone’s monitors were calibrated correctly, do they not realize that lighting and environmental factors can and do affect color? So a color that looks a certain way on the viewer’s monitor, even if it’s fairly representative of what that color looks like on the author’s walls, is not going to look the same in your home.

Most of the people reading Apartment Therapy seem to be designers or at least interested in design. They should know all that, but apparently they don’t. It’s enough to make the baby jeebus weep.

Another thing that amuses me is people arguing over what color something is. Today there was a scavenger post with a little desk that was ostensibly painted “teal.” Now, it looks more like seafoam green on my screen, but since my monitor and the post author’s monitor may not be calibrated the same way, I’m not about to argue it. Who knows, and more importantly, who cares? Apparently someone does cares. A lot. Because someone couldn’t help themselves from correcting the author: “That’s not teal!

My new favorite blog is Cake Wrecks. If you need a good laugh, check it out.

I’m also enjoying Eliza’s blog, mostly because she reminds me of people I know. It’s not always updated regularly (though she seems to be on a roll right now), but I keep her in my RSS feed.

And, another fake tilt shift image, made with TiltShiftMaker. 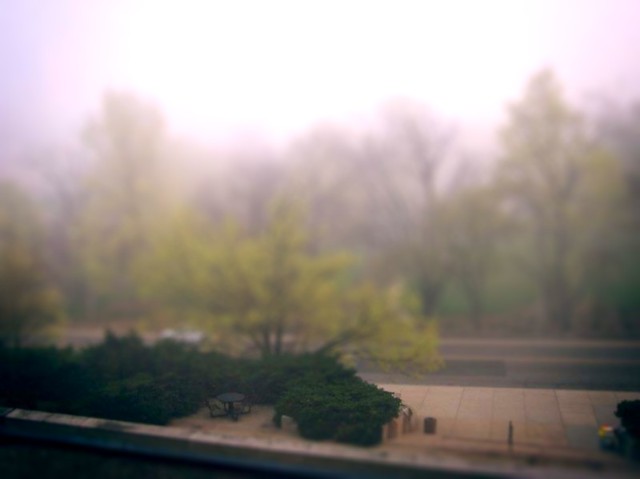 This isn’t from today, but it’s pretty much what it looks like out my window this morning (minus the spring greenery).

One of the blogs I occasionally read is by a woman who really, really, really does not like tourists mucking up her lovely city. Having lived in a tourist town (albeit much smaller than San Francisco!), I know that it can get old, being surrounded by people who are unconnected and who don’t belong there. And in our case, people who would wander into our house, thinking it was a shop.

So, I can sympathize. Really. What I don’t understand is that she, herself, travels all the time. She’s always posting about going here or there, or about her travel plans for her next week off. Doesn’t that strike you as a bit hypocritical? I mean, she’s a tourist herself, and here she is griping about tourists. And I can guarantee you, her impact as a tourist on the small towns she visits is much greater than that of the folks who swarm San Francisco is on her.

In other news, there’s a vulnerability in the version of WordPress I’ve got installed on my blog. I’ve been reluctant to upgrade, because of all the hell I went through with having to reinstall Coppermine. I’ve noticed, though, that my blog is loading very slowly. I assumed it one of my web host’s periodic slow-downs, but apparently not. I looked, and someone hacked my blog account and loaded a bunch of code into my template. It was easy to nuke, and is running nice and fast now, but I guess this means it’s time to upgrade to a more secure version.

Fingers crossed! I’m downloading a back-up, in case things go ‘splodey. I won’t be able to reinstall from the back-up, but at least I won’t entirely lose 3 years worth of journaling, either.

Somewhere near the top of the list of Bad Advice for Condoling the Bereaved is the expression, “It’s for the best.” Why on earth would anyone say that, even if they believed in their heart of hearts that it was 100% true?

On the other hand, Echidne, who recently lost someone very dear to her, had some perfect and beautiful words to say about grief

It’s like having to learn the world again. Every day the new world is more familiar, of course. But I still wake up feeling as if my outer shell has disappeared, feeling as if I have to defend myself against my own grief.
[..]
It’s all about those intricate webs of memory, love and dependency, and the webs have been cut through by that dark sickle of death. They must be mended, rewoven, repaired, and while that process happens one grieves.

She also talks about how grief keeps sneaking up on you. She likens it to rotten floorboards, where everything seems fine until you take one random step and it swallows you up again. I think that’s a pretty good analogy.

Have y’all checked out Notebookism.com or the Notebookism group on Flickr? If you haven’t, you should. Both are daily stops for me. And today, I’m the featured artist on the Notebookism blog. Aieee! Thank you, Armand!

So go have a look, and if you have any interest at all in notebooks, journaling, sketchbooks, bookbinding, etc., please make it one of your regular blog-stops. I promise you that it will be time well spent.

I woke up this morning with a sore throat. I think it’s just allergies, but that doesn’t make it any less annoying. Ugh. And, I don’t imagine that the lack of sleep, from which I am only slowly recovering, has helped one little bit. Even though I tried to go to bed at a reasonable hour on Sunday night, there were so many fireworks (still!) that it was a lost cause. It started with the Bumpasses, who were lighting bottle rockets in the back field, and ended up with someone from the other side of the court setting off ginormous wads of firecrackers in the parking lot. Every 30 minutes. Until 2am. When I went out to walk the dog Monday morning, there was a mass of red firecracker debris in the parking lot, mounded up right behind my car.

Now, tell me, what sort of jerk sets off firecrackers in the middle of the night, in a densely populated area, right next to someone’s car? I’d be seriously pissed off if my car were damaged by fireworks.

And then, of course, because I only got a couple of hours of sleep on Sunday night, Mr. Upstairs kept me up most of Monday night. Aieee! He does seem to be getting a little better, though, so I’m trying not to let myself get too irritated with him. He’s not blasting his television quite so loudly, and when he does have it on, it’s during sane hours. He’s also stopped jogging on the treadmill at 3am, for which I am deeply grateful. That said, he spent most of last night stomping around, and even with a box fan on high for white noise, he woke me up several times.

Which brings me to my amusing link of the day: The Astoria Notes. I read these awhile back, when I stumbled across a link to them on another blog. They were mentioned again, in comments at Passive Aggressive Notes, so I thought I’d share.

Goth Macros (yr corrosions, sing them to me). It’s funny, cuz it’s TRUE! Warning: Not necessarily safe for work, and some of them are pretty offensive. [ETA: Now defunct. Alas. But there’s a LOLGoth Tumbler that might be a reasonable facsimile.]

Also, Passive-Aggressive Notes from Roommates, Neighbors, Coworkers and Strangers, a new favorite of mine. I do so love a good passive-aggressive note!