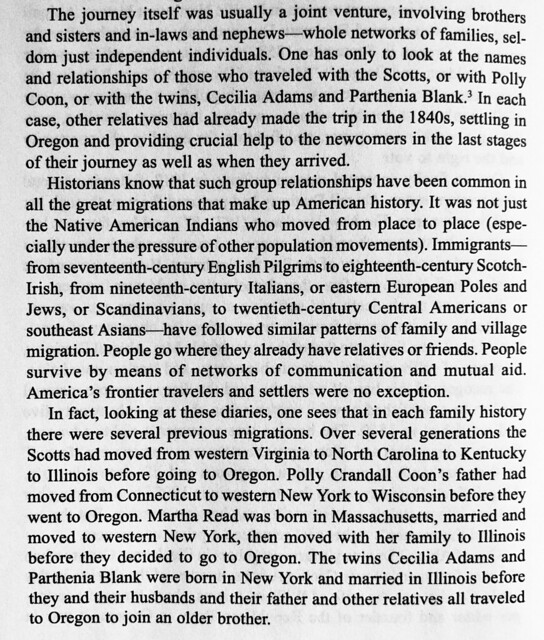 from the introduction to Covered Wagon Women, volume 5

If you think chain migration is a new thing, or that it’s a bad thing, you’re mistaken. It’s how people have moved the world over, forever and ever.

Elizabeth’s husband fell sick on the journey. He made it to Portland, but had to be carried to their leaky, lean-to shed and laid upon what was to become his deathbed. He lingered for two months, before finally dying.

feb 2 to day we buried my earthly companion, now I know what none but widows know that is how comfortless is that of a widows life espesily when left in a strange land without money or friends and the care of seven children — cloudy

That Spring, Elizabeth and her children left Portland, which she described as a “sick game place.” They settled in Yamhill County, and she soon married a man named Joseph Geer.

Imagine traveling by ox and wagon across the country, with no access to medical care, and only a few scant “medicines” at your disposal.

passed through St Joseph on the bank of the Missouri laid in our flour cheese and crackers and medicine for no one should travle this road without medicine for they are al most sure to have the summer complaint each family should have a box of phisic pills and a quart of caster oil a quart of the best rum and a large vial of peppermint essence. we traveled 4 miles the river and encamped here we found nine waggons bound for oregon. 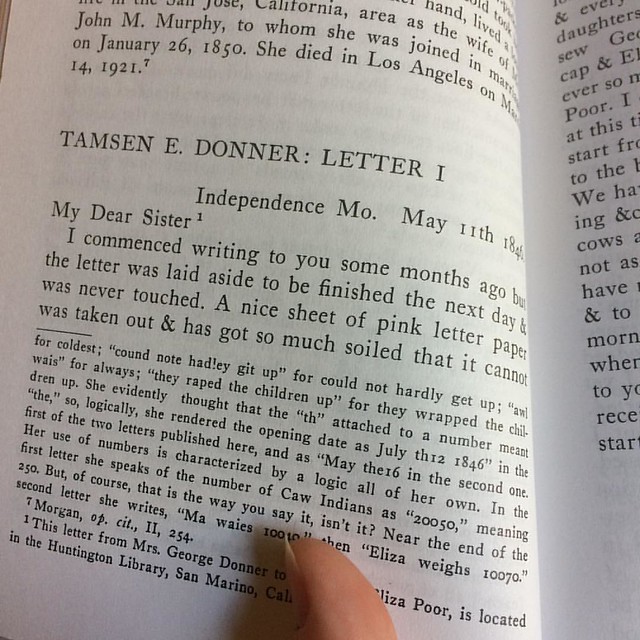 Tamsen was opposed to leaving the main road to take the Hastings Cutoff. Sadly, she never made it to California. Instead of evacuating Truckee Lake with the second or third relief party, she chose to stay behind to tend to her dying husband. When she finally left the cabins at Truckee Lake and attempted to walk out on her own, she made it as far as the tents at Alder Creek. There she either died or was killed by Lewis Keseberg.

Not all the women who traveled westward did so enthusiastically or willingly. Anna Maria King was one of them, though once her family was settled in Oregon, she found life there agreeable.

And although I was much apposed to coming as anyone could be, if I were back there and know what I know now, I should be perfectly willing to come.

Virginia was 13 years old when she was stranded at Truckee Pass with the the Donner party. Hers was the only family who did not resort to cannibalism, but that didn’t make their ordeal any less horrific.

The passage below is from a letter she wrote to her cousin, after the surviving members of the Donner party were rescued.

And so it begins 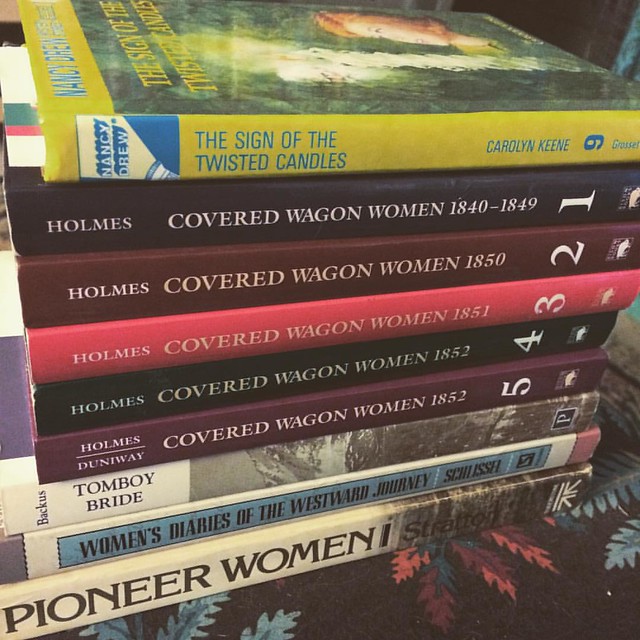 Ladyjournals, ahoy! But first I’m going to finish the Nancy Drew that’s been sitting on my bedside table.

All the diarists mention the Indians they meet on their journey. Most of the women’s descriptions fall somewhere between thoroughly ignorant and deeply racist. This passage is one of the few I’ve read that contains even a hint of awareness of the affect the white settlers’ movement westward was having on the peoples living on those lands.

Crossed the Missouri at Council Bluffs, where we had been a couple of weeks making the final preparations on this outskirt of civilization

The weather has been mild, and we have walked evry day over the rolling hills around — one day found a young physician and his wife who were interested in examining the numerous skulls and human bones that were found near the surface of the ground. After much speculation the fact was elucidated that, large tribes of Indians from the middle states had been pushed off by our government to this frontier region to make room for white settlers, and had here perished in large numbers by starvation consequent upon removal from familiar hunting grounds: they had been buried in large trenches with heads to the east. Skulls were thick: of peculiar shape differing from the Anglo Saxon type.

Three days later, Celinda Hines’ father died crossing the Snake River. He was thrown from his horse and drowned. His body was never recovered. In her journal, Celinda wrote, “I will not attempt to describe our distress & sorrow for our great Bereavement.” And indeed, she did not. She tells the story of his death almost matter-of-factly, but her grief is even more palpable for her terseness. The next day she wrote, “Our camp was in a very pretty place but all was sadness to me.”

Medicine on the overland trails left something to be desired. Some of the remedies were common sensical. Others, while they may not have done much to help the patient, at least they wouldn’t have harmed or killed her.

Lucy Rutledge Cooke suffered greatly from ulcerations and swelling of her tongue and throat. This went on for weeks, while she tried various ineffective remedies. One of them involved drinking “sugar of lead,” or lead acetate. We know now that lead should not be ingested, but in the past it was used for everything from sweetener to face cream to–as seen below–sore throat remedy.

My throat continues very bad I used Suger of lead once, but it had such a curious taste & turned my teeth so black that I could not endure to use it again I now keep sucking alum which seems to cleanse my mouth but really I dont know if it does further good

I drink chocolate all the time since I’ve been sick. I’m thankful to say my mouth seems much better to day. I have been using a gargle made of sage tea, alum, borax & sugar & it seems to benefit

We know now that cholera is spread by coming into contact with contaminated water. Bathing in water that could well be teeming with cholera bacteria seems now to be unwise at best. I’m not even sure how this cure was supposed, at the time, to have worked.

We had the hardest thunder storm last night I have witnessed in some years. Started on this morning & soon came to a very bad road, low marshy land. A little before we stopt at noon there was a woman by the name of Beal died. She was buried on the banks of the Clearwater, a fine stream about 10 miles from where we came on the bottoms. They immersed 3 in this stream for the cholera. Travelled 14 miles & slept on a high spot on the marsh for the night. Met the Salt Lake mail, they said they met 8000 teams when they got to Fort Laramee. Since that they have not kept count. Wether very warm.