Hurry Up and Wait

I had a strange dream the other morning. I woke up then went back to sleep, which seems to be when most of my bizarre dreams happen.

My whole immediate family were living in my mom’s house, which is biggish, but not big enough for eleven people. I mean, there’s only on bathroom, for crying out loud. Totally ridiculous. Also, my ex-step-father was living there, in the present. I have no idea why.

In my dream, we all went to the local Renaissance fair, held in the town’s historic district. ALL OF US. At the fair, my niece disappeared. We thought she’d wandered off, but we came to the conclusion she’d been abducted. We tried to call the police, to report it, but I was the only one with a cellphone, and my phone had disappeared. We finally put two and two together and decided that my niece had grabbed my phone, as she was being abducted, because she’s a smart cookie that way.

So instead of calling the police, we decided to go home and wait for my niece to call us. Which she eventually did. And when she called, all she wanted to do was discuss random minutia, like what the kidnapper had fed her for lunch and what color she wanted to dye her hair next. I finally got her attention by telling her that she was going to run down my phone battery, if she didn’t hurry up and tell us where she was.

She told us that the Magenta Lady had kidnapped her, because she wanted a girl of her own. I have no idea who the hell the Magenta Lady is, but in my dream it made perfect sense, and it was actually a good thing. We knew the Magenta Lady wouldn’t hurt my niece. Also we knew where to find her. Also also, this information made rescuing my niece less of an emergency.

And that meant that the second half of the dream involved my whole family, who were all living in one house, trying to decide whose room my niece would stay in, after she was rescued. (Um, how about the one she was staying in before she was kidnapped? PLOT HOLE, AHOY!) After much arguing, my room was chosen. That meant that I had to clear out a whole bunch of crap, because I am–in dreams as in real life–a junior-league hoarder.

We spent all day boxing up junk and carrying it down to the car, to take to Goodwill, at which point my ex-step-father had a damn melt-down about how long it was taking us. He wanted us to hurry the hell up. Okayfine, but every time I took a box of junk down to the car, my mom had to go through it and take 2/3 of the things back out again. I yelled right back at my ex-step-father that it was not my fault we were late. I was bringing things out of the house as fast as I could, and my mom was taking them back to the house just as fast. It was like packing sand down a rat giant hole.

So then my ex-step-father stomped back into the house and locked himself in the bathroom. At which point I woke up.

That last part of the dream, where my ex-step-father yelled at everyone for taking too long to get in the car, and then having a melt-down and stomping back into the house and locking himself in the bathroom? Every. Single. Morning. He would yell at us for making him late for work, and then as soon as we were all in the car, he’d go back in the house and use the bathroom. Totally ridiculous, and it used to piss me right the hell off.

I had a dream last night that the Obamas came to game night at a friend’s house. We were playing Apples to Apples, and after one round, Mr. President stood up and said he had to pee. We all laughed. Mrs. Obama asked what was so funny, so I explained to her that Hoosiers always announce when they’re going to the bathroom. Which, of course, means that Mr. Obama must be from Indiana. Take that, birthers!

The Dream of the Lizard Baby

I had the weirdest dream this morning.

I came home and found that the obnoxious Cadillac from #5 was in my spot, only it was parked sideways, taking up three spaces. But because of bizarro dream physics, there was plenty of room for me to pull into my spot, blocking the Cadillac in. So I did. And then Mr. #5 came out and begged me to give him just five minutes to move his car, which I begrudgingly did.

I backed up my car and sat, waiting. And then I noticed that an ambulance was parked across my apartment door, blocking the entry. Okaythen! I may as well wait for Mr. #5 to move his car, because I can’t get into my apartment, anyway. So I did. And while I was waiting, the paramedics brought out a baby. In an aquarium. As I looked more closely, I saw that the baby was lying on its stomach, but lifting itself up with its front arms. Like a lizard. And then I looked even more closely, and saw that the baby was half lizard. A-ha! That’s why it was in an aquarium!

At that point, a girl tapped on my car window. I rolled down the window to talk to her, and saw that she was decked out head-to-to in preacher clothes. And then I noticed that there was a preacher standing on every doorstep in my court, preaching to no one.

And then I woke up. Teh enb.

I half-way woke up from a dream last night, enough to know that I had been dreaming, but not enough to be completely clear headed. I didn’t open my eyes, because, even though I was awake, I was seeing some Very Fun Stuff. It was like millions and millions of crazy images were flashing by on a giant, spinning cylinder. Flick, flick, flick, they flew by. In super-saturated color, but silent, and with dark, cloudy edges and scratches, like old home movies.

I Had a Dream, Joe 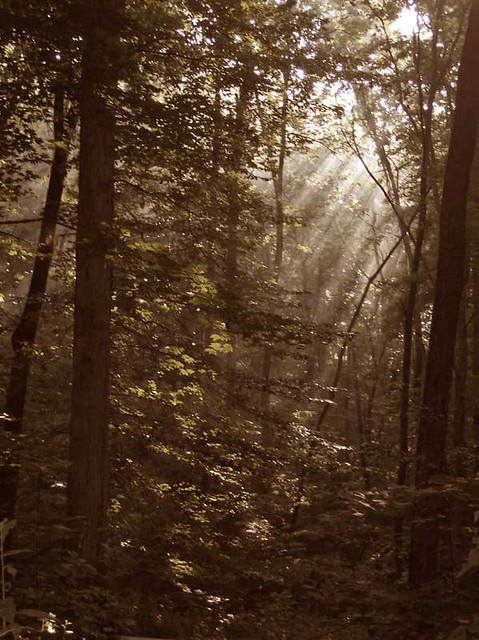 I’ve been sleep deprived lately. I haven’t even been able to catch up on the weekends, which really sucks. This morning, I was able to go back to sleep after getting up at an insane hour to let out Miss Brown and feed her. And, I remembered why I don’t like going back to sleep. I had the damnedest dream. Well, two of them, actually. One was about house hunting, and was really unpleasant and stressful. The second one was just plain bizarre. I was standing in my front yard, in the sun, talking to my neighbor. He was wearing a floppy “farmer” hat and pointing at something off to the southwest. That was all fine, but then I realized that he had no body. He was just a big ol’ floppy-hatted head and a hand wearing a flowered gardening glove. WTF?! There was a Wizard of Oz vibe about the dream, in that it was slightly menacing but reassuring in that “it’s just a dream” sort of way

I’m going to try to go to bed early tonight, so that I won’t be tempted to sleep in tomorrow morning.

I stayed up way past my bed time last night, watching a truly awful interpretation of The Swiss Family Robinson. Why do I do these things to myself? I loved the MacGyver aspect of the book, so, since I’ve been on a bit of a pioneering bender, I’d added the series to my Netflix queue. (Yes, these are the aforementioned discs that were shipped to me out-of-order.) I assume the series was created for cable teevee, but I don’t know which company to hold responsible. Really, it’s that bad. I can’t even recommend it for the cheese factor. That’s two hours of my life I won’t be able to get back.

Because I was up so late, I slept in this morning. That’s rarely a good idea, because when I do, I inevitably have bad–or at least weird and disturbing–dreams. Usually they involve things like being chased around abandoned amusement parks by Sleestak and/or Stormtroopers. This morning’s weird and disturbing dream was caused by yesterday’s bout of template ugliness. I dreamt that the CIA were forcing me to control people’s behavior with style sheets. Not being any sort of coding genius, I had to figure out, by trial and error, how changing tiny variables would affect people. I don’t remember any more of the dream than that, but I woke up feeling just a little panicked.

I think it’s time for me to toddle off in search of caffeine.

Speaking of Things That Make You Go Hmmm…

Like the Rev. King, I had a dream. Only, mine happened while I was sleeping. I had this one a few weeks ago, but it was so mind-boggling that I’ve been thinking about it quite a bit.

See, he was drying pot in the microwave. Very important, that, and not to be interrupted, apparently. Also, he was always a stickler for asking for exactly what you wanted, instead of either hinting around at it or waiting for the other person to offer up what you needed. All well and good, I suppose, but at times, especially when I was young, it seemed like a cruel sort of game to him.

So, my interpretation is that:

2) He was perfectly happy to let the world combust around him, as long as his own needs were being met. He was spectacularly selfish that way. So, I can totally see him thinking that his priorities might take precedence over others’, because often, they did. And, when they didn’t, he could be the world’s worst Whiney McWhinerPants.

Flambé is NOT the Answer!

I watched Cabin Fever last night. Which was probably not a good idea. Not that the movie isn’t good. It is! It’s Friday the 13th meets Texas Chainsaw Massacre, with David Lynch-style surreality and Troma-style absurdity. It’s funny, smart, and creepy as hell. It’s one of the very best horror movies I’ve seen, and I’ve seen a lot of horror movies.

Anyway, I suspect that’s what lead to a night of strange dreams.

I had some weird-assed dreams last night. In one of them, I was hanging out with a group of friends near the loading dock of one of the buildings on campus. There was another group of students across the parking lot from us, with two Husky puppies, which were playing. One of my friends dropped a piece of sausage from his sandwich. I could tell that the puppy saw the food fall, but he was too interested in playing to come get it just yet. Eventually, he trotted across the parking lot to get the sausage, but a guy suddenly appeared from behind a delivery truck, reaching out and grabbing the dog. He swung the dog around in circles on the end of a leash. Where the leash (or the guy!) came from, I haven’t a clue. C’est la logic of dreams. When the dog hit maximum velocity, the guy let go of the leash, catapulting the dog out of scene. My friends and I were both seriously creeped out and royally pissed off. Realizing that the guy was a dangerous psychopath, we decided to leave. On the way, one of my friends doused the guy with lighter fluid (again, where on earth did it come from?) and set him on fire. My response was, “Dude, flambé is NOT the answer!”

And then, of course, I woke up.