If you’re in the U.S. and have access to CSPAN 3, I strongly recommend looking for a re-run of Pamela Smith Hill’s talk on Pioneer Girl.

I have the book, which is quite good. It contains the text of Laura Ingalls Wilder’s first, previously unpublished autobiography which she used as an outline for the Little House books, along with a ton of photos and scholarly research by Pamela Smith Hill about Laura and her writing.

ETA: You can watch the video online, here. I couldn’t find an embed code, alas, and I don’t know if it’s region locked to the U.S. only. 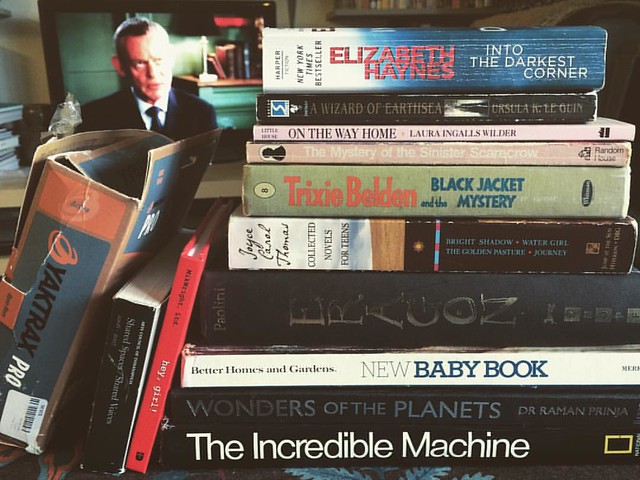 I had another round of fasting bloodwork this morning. Ugh. I decided I needed some retail therapy afterward, so I went to Goodwill.

The store on my side of town moved and had their grand opening on Tuesday, so this was my first visit to the new location. It’s huge! Things are still a little jumbled, in the book section, but that’s okay. That didn’t slow me down much.

The big books on the bottom are full of illustrations that I’ll use for collage.

The little Laura Ingalls Wilder book is her journal of her and Almanzo’s move from De Smet, south Dakota, to Mansfield, Missouri, where they settled permanantly. I dont think it’s the entire journal (I’ve read it but don’t own it). It’s packaged for young readers, with a foreword by Rose Wilder, so I’m betting it’s pretty heavily edited. It has quite a few pictures I’ve bever seen, though, so I grabbed it up.

I also found a pair of Yaktrax for $5. Now I can walk Frances when there’s ice, withought killing myself.

I’ve been reading a collection of the articles by Laura Ingalls Wilder for the Missouri Ruralist paper. She wrote on a wide variety of subjects, and while she had some decidedly un-feminist beliefs, some of her writings are thoroughly feminist in nature.

Writing about the creation of a local farmers’ club, she touched on the subject of women’s participation (emphasis mine).

As arrangements were being made for a meeting of the club, some one near the speaker said, “The women must come too,” but it was only after a broad and audible hint from a woman that this remark was made and it was so plainly because of the hint, instead of from a desire for the women’s presence and co-operation, that it made no impression.

At the first meeting of the club, the following week, there were only two women present. Quite likely it was the women’s own fault and if they had taken part as a matter of course, it would have been accepted as such, but it seems rather hard to do this unless we are shown the courtesy of being mentioned. We will get over this feeling in time no doubt and take the place we should, for a farmer may be either a man or a woman and farmers’ clubs are intended for both.

While she’s speaking specifically on the subject of farmers’ clubs, the broader point that it was and is difficult for women to make a place for themselves in male-dominated spaces is also true. And it doesn’t take an openly hostile atmosphere to make things uncomfortable for women. Just the fact that we’re in the minority and that we know we aren’t actively wanted there is intimidating.

Fifteen of the last twenty visits to my blog were from people searching for information on the Ingalls family. That post is over three years old, and it is still, by a huge margin, the most popular on my blog. I think that’s kind of amazing. And weird.

Little House on the Prairie: Fin 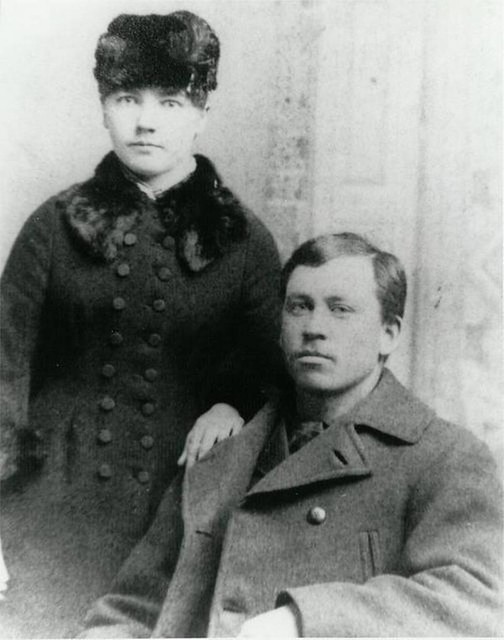 Laura Ingalls and Almanzo Wilder, circa 1885

I mentioned a long while back that I was working my way through the entire series of Little House on the Prairie. Well, I finally finished season nine. One of the reasons it took me so long to finish was that I was busy moving. I also got distracted by having cable again. Mostly, though, the final seasons were increasingly depressing and disappointing and I just didn’t want to watch them. And then there was the fact that I’d recently re-read the books, and while the early seasons of the show departed significantly from them, the final seasons were all kinds of made up.

So, my final verdict is that the early episodes are great, but the later ones are kind of craptacular.

Little House on the Prairie

We’ve all seen the Little House on the Prairie television series.  I grew up with it, and with the books.  I thoroughly and (mostly) unreservedly loved both.  It’s been years since I’ve seen the series, and I missed the Disney miniseries that aired a couple of years ago.  When I was in high school, my Little House books were lost in a move, so it’s been even longer since I’ve read them.  Via the magic of Netflix, I’ve been able to watch not only the Disney miniseries, but the original series and its pilot, and I have some rambling and disjointed thoughts and observations. 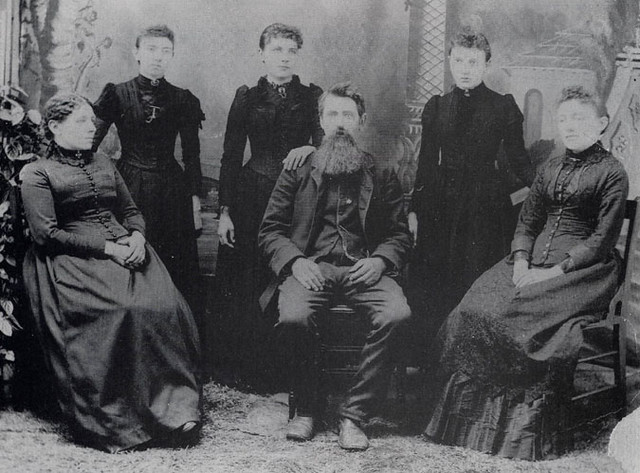 I don’t have satellite or cable TV, and my TV reception is not good enough to get ABC, so I did not see the 2005 miniseries when it aired.  I didn’t even know it existed, until I searched Netflix for the original series.  I watched the miniseries, and was impressed with it.  The sets, costumes, and actors were wonderful.  The script was pretty good, and coincided fairly well with my recollection of the books.  I don’t know how true to history the depiction of the Osage was, but it was believable.   My only quibbles, and they are small, are that the music and the new age crap were out of place. 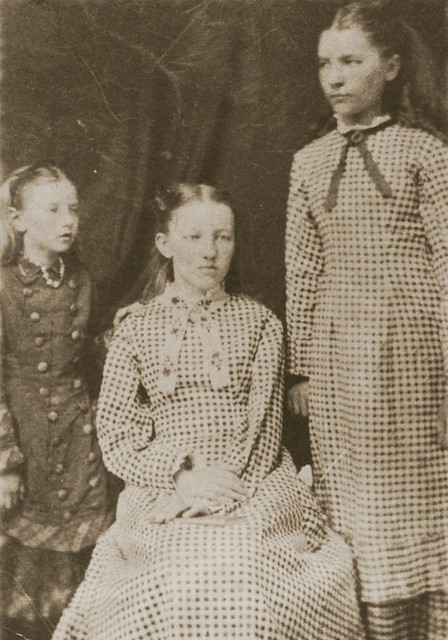 Left to right: Carrie, Mary, and Laura Ingalls, circa 1894

Jack, who was a bulldog in real life (the 19th century bulldog was most closely related to today’s Pit Bull), was depicted as an Australian Shepherd.  There was a subplot that revolved around Jack’s bicolored eyes.  Allegedly “Indians” called such dogs “spirit dogs” and feared them, which accounted for the Ingalls not being attacked by the local Indians.  Um, no.  Also, the “Enya on the Prairie” music was horribly out of place.

I went online and hunted up some critiques of the miniseries.  It was a mixed bag, with some folks feeling it stuck more closely to the books than the original series and others feeling it had strayed too much.  Interesting.  There was pretty universal praise of the depiction of the Osage and universal condemnation of the new agey bits.  So, my reactions were not out of line.

There was also criticism of which bits of the Ingalls story the creators decided to focus on.  Some folks quibbled with the decision to leave Carrie out of the picture (she was born while the family was in Kansas territory).  Others felt the miniseries should have shown the later parts of the Ingalls’ lives, after they’d left Kansas territory and moved to Minnesota.  They didn’t like that the miniseries did not follow the same plot line as the original series.

Laura Ingalls and Almanzo Wilder, circa 1885

Now for the interesting (to me, at least) part.  I next watched the original pilot.  I’d never seen it before, and assumed it would cover the family’s move to Plum Creek.  Nope.  It followed the exact same story line as the 2005 miniseries.  In fact, the majority of scenes in the new shows followed the old pilot almost identically.  The main differences between the two was the reason given for the family leaving Kansas territory and the depiction of the Indians.

In the pilot, the family were forced off their land because the government re-negotiated its treaty with the Indians, and the family were on the wrong side of the new boundary.  In the 2005 miniseries, the family were accused by settling the land illegally, without having filed a proper claim.  I don’t recall which is true; maybe neither is. I’m not sure it really matters much in terms of the telling of a successful story.  (And, that’s what the original books were.  They were stories, not strict autobiographies.)

The handling of the Indians differed between the two series, as well.  In the original pilot, they are treated as flat characters.  They’re just generic mid-70s teevee Indians. Caricatures.  In the 2005 miniseries, the Indians are more completely depicted.  They are families with children as well as a nation facing pressures and conflicts both within and without.

One thing that struck me anew while watching all the incarnations of the stories is the breadth and depth of the role pioneer women played.  They weren’t just meek and mild cooks and child tenders.  They helped build houses, plough fields, and harvest food.  And they did it in corsets and several heavy layers of clothing, even when the weather was blisteringly hot.  These women were no delicate flowers.  If they had been, their families would have never survived, much less flourished, under such harsh conditions.

So, anyway, now I’m working my way through the original series.  I’m about half-way through the first season, and it’s just as charming–and ham-fistedly cheesy–as I remember it being. It’s good, good stuff. 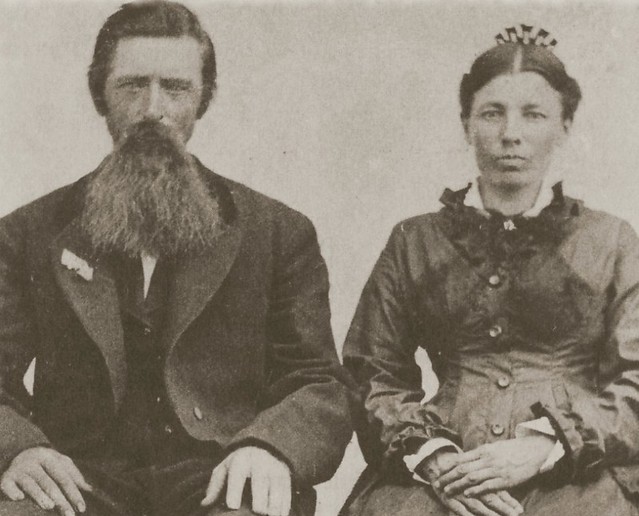 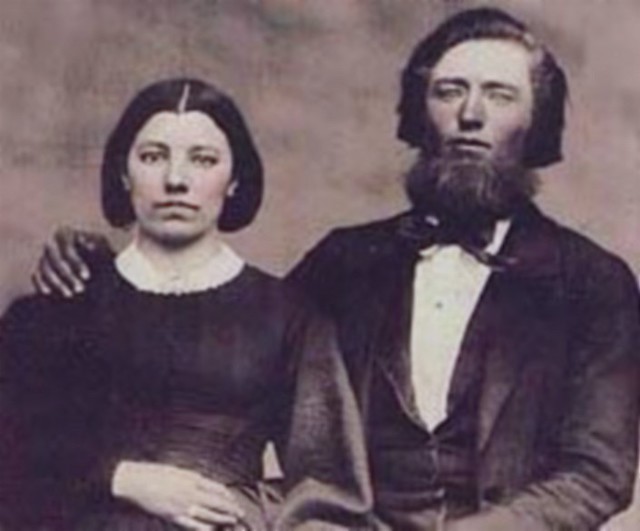 I included photos because I found them fascinating when contrasted against today’s popular representations.  Doesn’t Pa resemble Abe Lincoln in that last photo?

I’m through with season 3 of Little House on the Prairie, and have begun season 4. It’s been thoroughly enjoyable, my personal issues with Michael Landon notwithstanding. However, I have a few Picts to bone:

I finished the second season of Little House over the weekend, and started on the third. One episode contained a funeral scene in which a sweet little poem was read. It reminded me of a song, but even though the lyrics and melody were on the tip of my tongue, I couldn’t identify which one. It nearly drove me to distraction.

Then, this morning as I was packing my lunch, it came to me. Class, please compare and contrast:

Now, as much as I’d love to think of CuddlyGoth Robert Smith as a closet Little House fan (and I dearly would, just for the absurdity factor), I’m having a small amount of trouble picturing it. More likely, both Robert Smith and the writer of that Little House episode were both inspired by the Christina Rosetti poem, Remember.

Remember me when I am gone away,
Gone far away into the silent land;
When you can no more hold me by the hand,
Nor I half turn to go, yet turning stay.
Remember me when no more day by day
You tell me of our future that you plann’d:
Only remember me; you understand
It will be late to counsel then or pray.
Yet if you should forget me for a while
And afterwards remember, do not grieve:
For if the darkness and corruption leave
A vestige of the thoughts that once I had,
Better by far you should forget and smile
Than that you should remember and be sad.