The big dogs are like, “NOPE, WE WANT NO PART OF THIS,” and the Boston is all, “This is my deadpan face.”

I have seriously watched this about a hundred times. 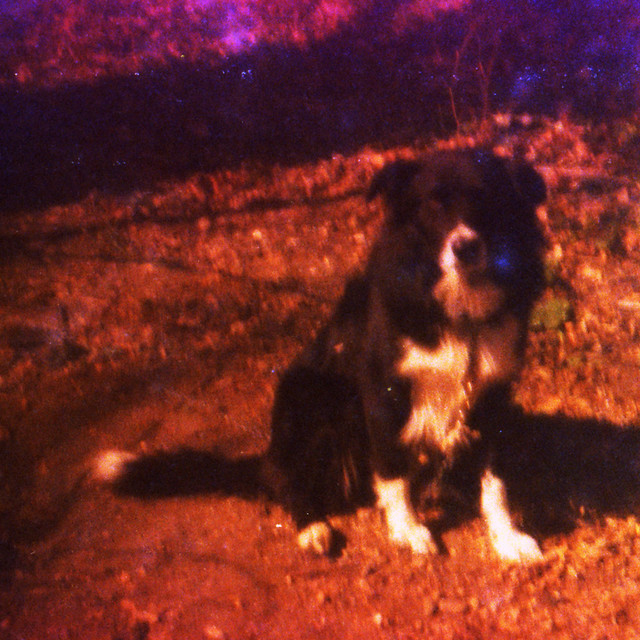 Bear showed up at our house and insisted he was going to live with us. About a year later, some pre-teen kids knocked on the door and claimed he was their dog, but he was having none of it, so he stayed put. I only have a couple of photos of him, and this is the clearest. He was some sort of generic farm Collie mix. Leggier than a Border Collie and without the characteristic crouch and evil eye.

Mallory Ortberg hits it out of the park again. Of course.

Excuse me, hello, art? I will be requiring the permanent ownering of these dogs posthastely.

Source: Dogs I Would Like To Own In Art 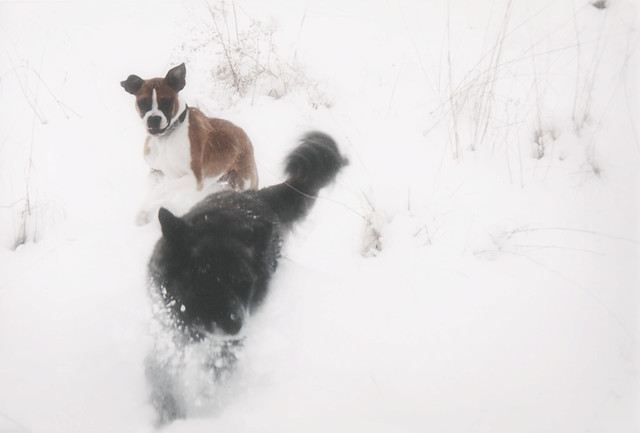 To that time when I had two dogs and lived in the country. 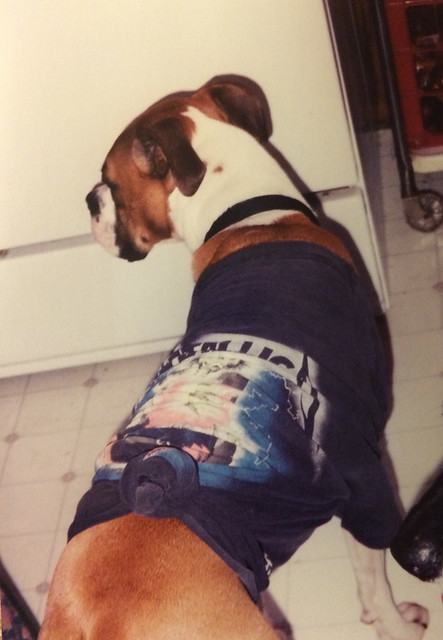 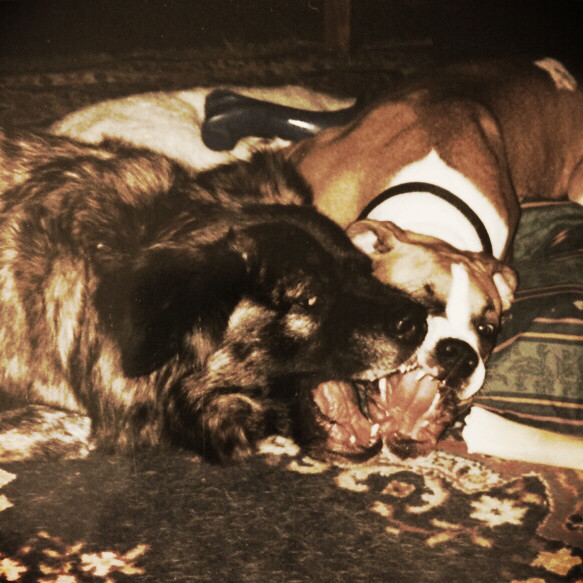 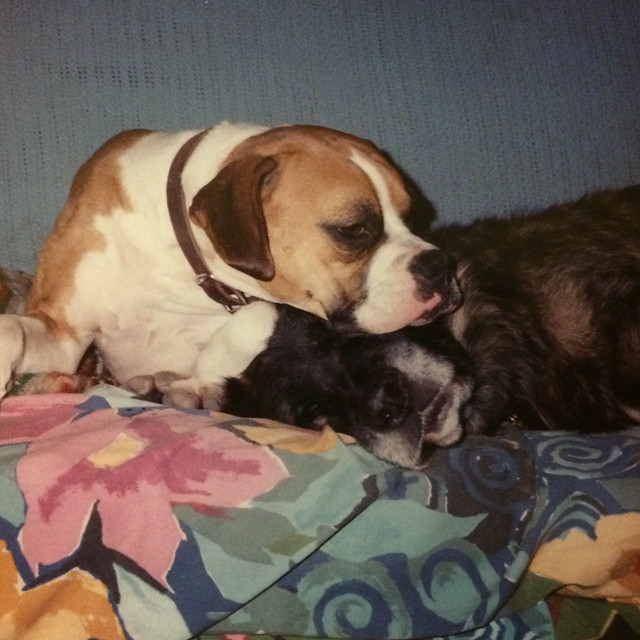 As I was cleaning and sorting and getting rid of mountains of crap, I came across a box of photos I’d forgotten about. These are some of my favorites. Harriet was the original bosslady, and Elliott was her willing minion.

A Thing That Is Not Cute 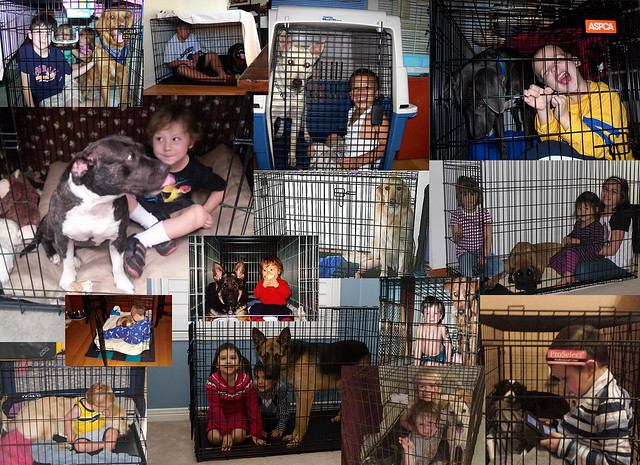 Thirty Seconds of Googling for Kids in Crates with Dogs

A rescue group in the town where I used to live posted a photo of a kid in a crate with one of their dogs. Comments poured in, exclaiming the cuteness of the wee tot and the sweet doggie. I commented that I thought it was a bad idea for kids to be in crates with dogs, and that I think it’s irresponsible for rescue groups to set that as an example of cute behavior. It’s not cute. Not even a little bit.

A crate is a dog’s safe place. It may be the only safe place the dog has. It is also a small, enclosed space. A space that even the sweetest, kid-lovingest dog might suddenly decide is worth fighting over. And you will not be able to do a damn thing about it, because you are on the outside of the crate and the kid and dog are on the inside. And also you will be busy taking photos and cooing over how cute the little moppets are.

So. Kids do not belong in crates with dogs. And I said so. Out loud and in public on a rescue group’s Facebook page, after they posted a really not at all cute photo of a kid in a crate with a dog. They told me to chill out, that the kid was fine and the dog loved him. Which yes, I’m sure is true. I don’t even doubt it a little bit! But still, it is a bad example. (And also, I do not think the dog was as happy about it as they insist she was.) And I said so. Again.

I made a total of two comments. I said my piece–politely!–and then I let them have all of the last words and I got on with my life. Well last night I saw a cute tuxedo cat on their page, named Piglet, so I thought I’d share it because Piglet is a right and proper name for a tuxedo kitty, yes? And in doing so I noticed that they’d blocked me from commenting on their page. And further digging revealed that they’d removed both of my comments from the kid-in-crate-with-dog photo. WTF? Is this how grown-ups act? No, I do not think so!

(The group’s photo is in the collage above. Middle of left, brindle and white Pit Bull with curly haired wee moppet. See the side-eye? See the licking of the lips? See the tight ears? That is not a happy, comfortable dog.)

Spying on the Neighbors, Wayback Edition

It’s a weird sort of continuity, when I watch my new dog doing the exact same things my last dog did.

More than a hundred years apart, and still he and Frances look like they could be siblings. 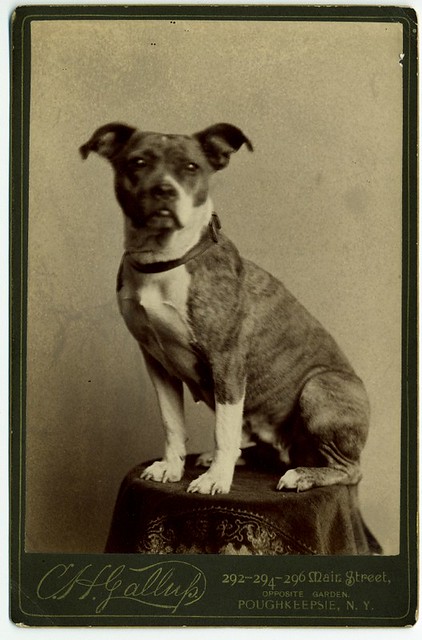 Billie Holiday with Her Boxer Dog, Mister, circa 1947 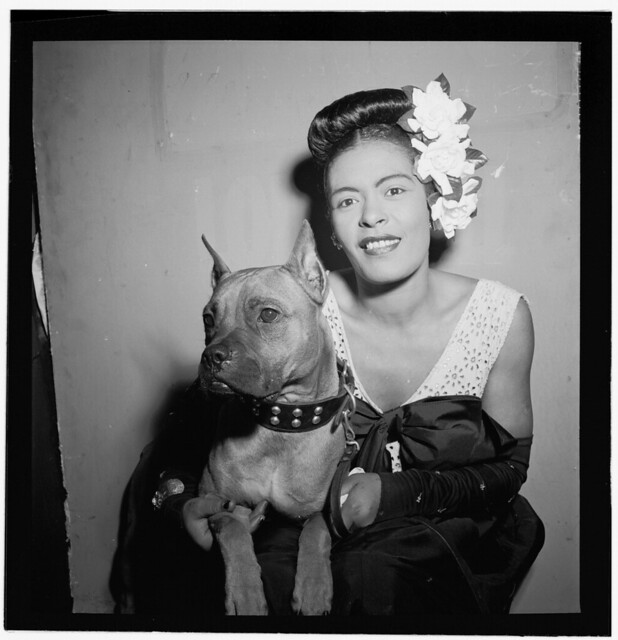 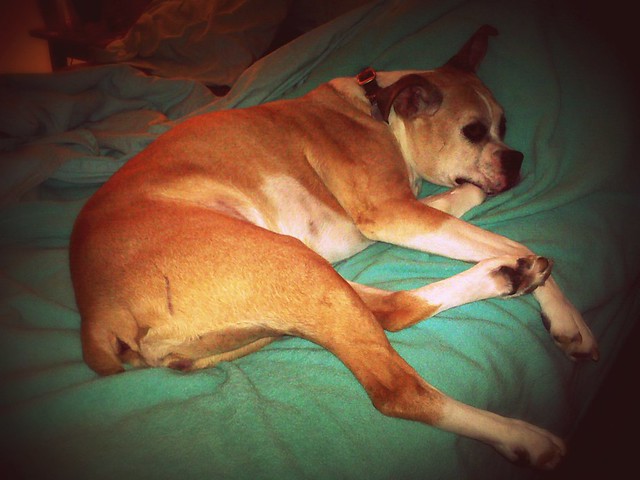