And check out this nonsense. There’s a Samuel C. Fernander living with Samuel and Parmelia Thompson, in the 1850 census. I tried to figure out what the connection is, because there probably is one. He isn’t listed as a hired hand, so maybe a relative?

I went to look at the world tree at FamilySearch. That’s always entertaining. I found him, and he appears to have a sister named Pamelia. Hm. 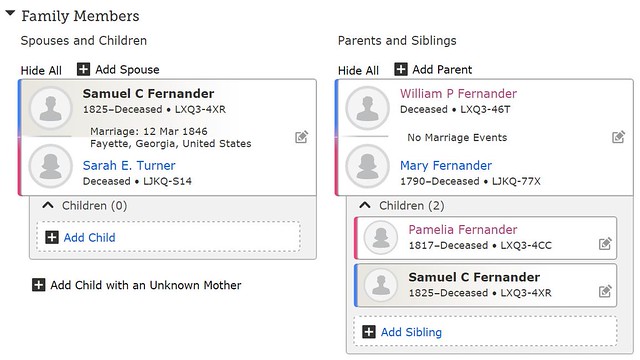 Maybe Parmelia was married before she married Samuel Thompson? Could Fernander be her maiden name? Unlikely, because she was only about 18 years old when she and Samuel married.

If you look at the Pamelia who is allegedly Samuel C. Fernander’s sister, you find that she’s got a bunch of kids who look remarkably like the children of Samuel Thompson and Parmelia Weathers. No spouse listed, but these are my people. 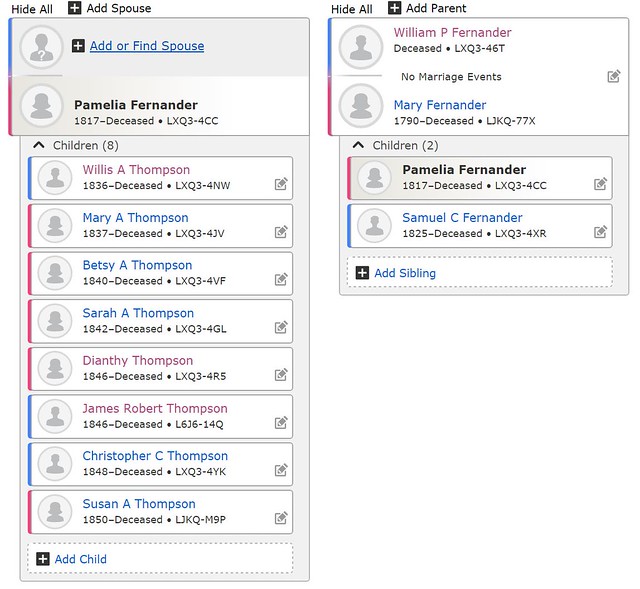 I could unlink her from this family and link her to Samuel Thompson, but sorting out the cascade of duplicates would make me cry. I’m not sure that mess can be undone. And of course there are no sources listed, so I have no idea where this crapfest came from.  And I just looked at the past edits, and it looks like someone removed Samuel as the father.  WTF?

ETA: If you look at the James Robert Thompson, son of Pamelia Fernander, you’ll see that his wife and children have absolutely nothing to do with my family. This should be my 3rd great grandfather, but he isn’t. Unless he had a second family on the side? Hm. Now that would be kind of entertaining. 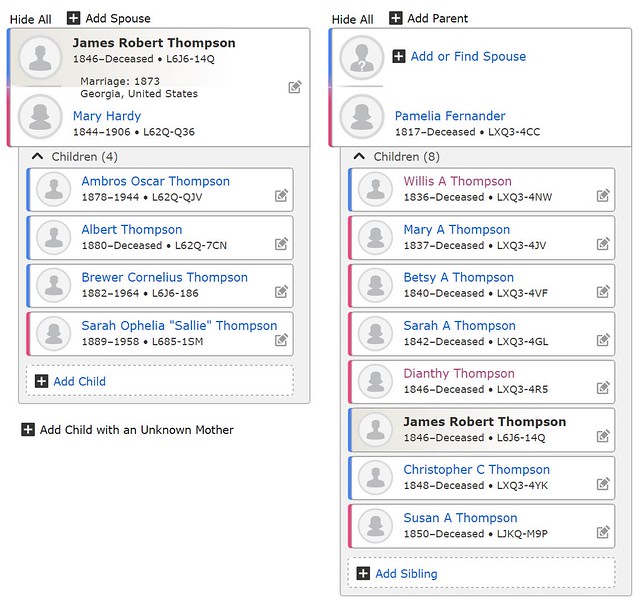 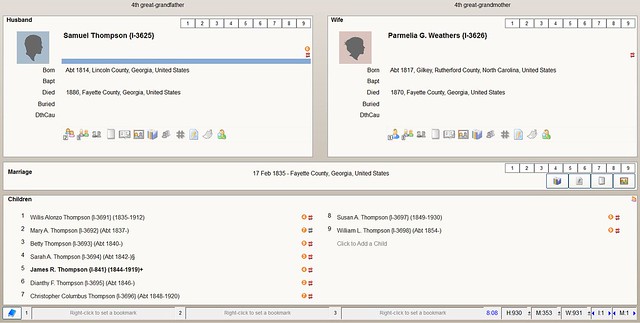 I’ve been working on this hot mess. Not to complain. There are far worse genealogical problems to have! I was finally able to break through a brick wall I thought I’d never crack. My maternal grandma’s parents were Logan Louis Thompson and Helen Gertrude Basquille. I knew who Louis’ parents were: William Boring Thompson and Estelle Hoover. However, the Thompson line went dead there, and the name is common enough that I didn’t have any hope of making any connections.

But then I started looking at William Thompson’s siblings, thinking I might be able to tackle it that way. He had a brother named Roy. Some more searching turned up that his first name was Wiley, and from there I was able to find his World War I draft registration card, where he names his father as his contact person: J. R. Thompson living at 585 Lee St, Atlanta. 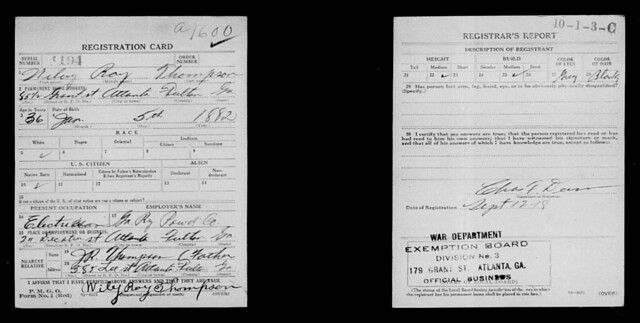 It’s not much, but it was enough. I started scouring the Atlanta city directories. It took multiple passes; as I gathered each new clue, I went back and looked again, and again and again. I was able to piece together that J. R. is James R. He married Martha J. Edmonds in 1869, in Campbell County, Georgia. I’ve found a couple of tax records that I think match with him, for the 1870s, and then by 1880 the family moved to Atlanta, where James was working as a wood dealer. In 1882 he was listed as a grocer and butcher, then in 1885 a policeman. In 1886 he was a railroad watchman, then in 1891 he turns up as a farmer.

In 1894 things get weird. I can find his wife, Martha, listed in the Atlanta city directory. She’s living at the last known address for James, working as a dressmaker. In 1895 I find James at a separate address and Martha listed as his widow. That went on for a few years, with James turning up under the name John R. Thompson and living apart from Martha. Why the name change? And why tell everyone your husband is dead? There’s a story there that we will likely never know.

Then between 1901 and 1908, James disappears completely. In 1909 he’s lost the alias and is working as a peddler. He and Martha are living together again, too. They’re listed separately again in 1911. James is back to working as a wood dealer, and in 1912 he starts using the alias again. Martha dies in 1915, but James is listed, working as a wood dealer. There are a couple more blank years. The last directory he shows up in is 1918, where he’s listed as a retail grocer. He dies in 1919.

It’s a whole lot of tiny details, and if you don’t get your stepping stones in order, you won’t be able to cross the stream, so to speak. From what I can infer, he was decently well off at the start of his marriage. Something happened, though, and it looks like things kind of fell apart for him.

So we have James R. Thompson mostly sorted. There’s really not much information out there. However, he turns up again, in his father’s will. This is kind of awesome, because it tells me that I have the right pieces, and that I’ve put them together correctly. I an connect William Boring Thompson’s brother, Wiley Roy Thompson, to their father, James R. Thompson. And I can connect James R. Thompson to his father, Samuel Thompson.

Pet peeve: I wish Samuel had named his wife in his will. I can’t find any death records for Parmelia Weathers, but everything I could find said she died between 1870 and 1880. And that fit with my information. She was enumerated with Samuel in the 1870 census, but in the 1880 census, his wife was named Martha. And though you can’t take census information at face value, the 1880 census said Martha was born in Georgia. Parmelia was pretty consistent about giving her birth place as North Carolina. This is not a wrong name for the same person. Samuel had a second wife. And after some digging, I found their marriage record. It was the second marriage for her, as well. Her husband died, probably in the Civil War, given the timing. Martha and Samuel married in 1871. So even though Samuel didn’t name her in his will, the wife he mentions is Martha, not Parmelia.

The name on their marriage record is Martha Huddgings. I believe it’s actually Hudgens. That’s the surname of her first husband, though. Hopefully I’ll be able to find her maiden name, because I really want to give that back to her. There’s a really horrible entry in the world tree at FamilySearch for Samuel’s family, but it lists Martha. Twice. Apparently Samuel and Martha are Samuel’s alternate parents. There’s another entry for Martha, with her first husband. It’s also a giant rat’s nest, but it gives Bishop as her maiden name, which might be useful. This tree lists a totally unrelated second husband. I have no idea who he is or why anyone though he belonged there. But if you look 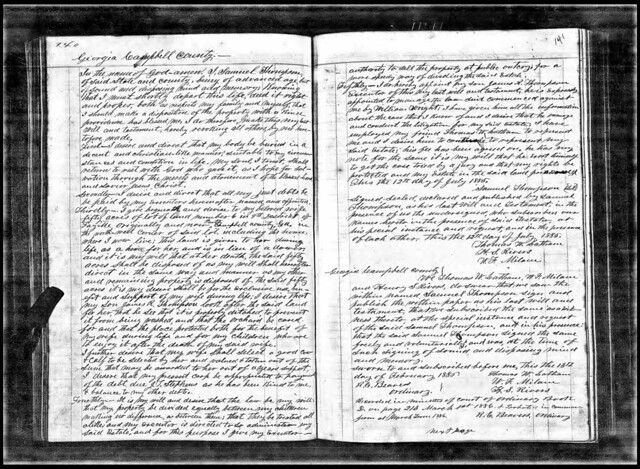 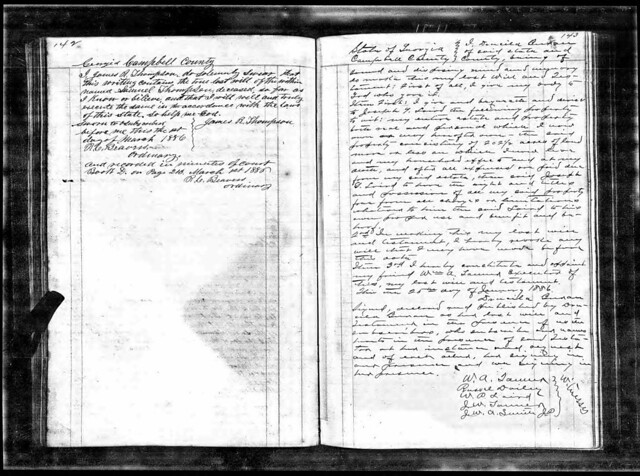 In the name of God-amen. I, Samuel Thompson, of said state and county, being of advanced age, but of sound and disposing mind and memory; Knowing that I must shortly depart this life, deed it right and proper, both as respects my family and myself, that I should make a disposition of the property with a kind providence has blessed me, I do therefore, make this my last will and testament, hereby revoking all others, by me heretofore made.

First — I desire and direct that my body be buried in a decent and Christian-like manner, suitable to my circumstances and condition in life. My soul, I trust, shall return to rest with God who gave it, as I hope for salvation through the merits and atonement of the blessed Lord and Savior Jesus Christ.

Secondly — I desire and direct that all my just debts be paid by my Executors hereinafter named and appointed.

Thirdly — I give bequeath and devise to my beloved wife fifty acres of lot of land number 6 in 9th District of Fayette originally and now partly Campbell County, Ga. in the north-west corner of said lot, including the house where I now live; this land is given to her during life, as a home for her, and is in lieu of a dower, and it is my will that at her death, the said fifty acres shall be disposed of as my will shale hereafter direct in the same way and manner as my other and remaining property is disposed of, the said fifty acres it is my desire shall be for the exclusive use benefit and support of my wife during life; I desire that my son James R. Thompson look after the said land for her, that he see that it is properly ditched, to prevent it from being washed, and that the orchard be cared for and that the place protected both for the benefit of my wife during life and for my children who are to enjoy it after the death of my said wife. I further desire that my wife shall select a good cow & calf to be selected by her and valued & taken out of the sum that may be awarded to her out of a years support, I desire that my present crop be appropreated to payment of the debt due J. T. Stephens as he has been kind to me, & balance to my other debts.

Fourthly — It is my will and desire that the law be my will that my property be divided equally between my children making no difference, as between them; that they be treated all alike, and my executor is directed to so administer my said estate, and for this purpose I give my executor authority to sell the property at public outcry; for a more speedy way of dividing the said estate.

Fifthly — I do hereby appoint my son James R. Thompson Executor of this my last will and testament, he is expressly appointed to manage the law suit commenced against me by William Wright; I have given him all the information about the case that I know of and I desire that he manage and conduct the litigation for my said estate; I have employed my friend Thomas W. Latham to represent me and I desire him to continue to represent my said estate; his fee has been agreed on, he has my note for the same it is my will that he exert himself to get the case tried by a jury and that my rights be protected and my estate in the said land [preserved?].

Sworn to and subscribed before me, this the 13th day of February, 1886

I, James R. Thompson, do solemnly swear that this writing contains the true last will of the within named Samuel Thompson, deceased, so far as I know or believe, and that I will well and truly execute the same in the accordance with the laws of this state, so help me God.

Sworn to & subscribed before me this 1st day of March 1886 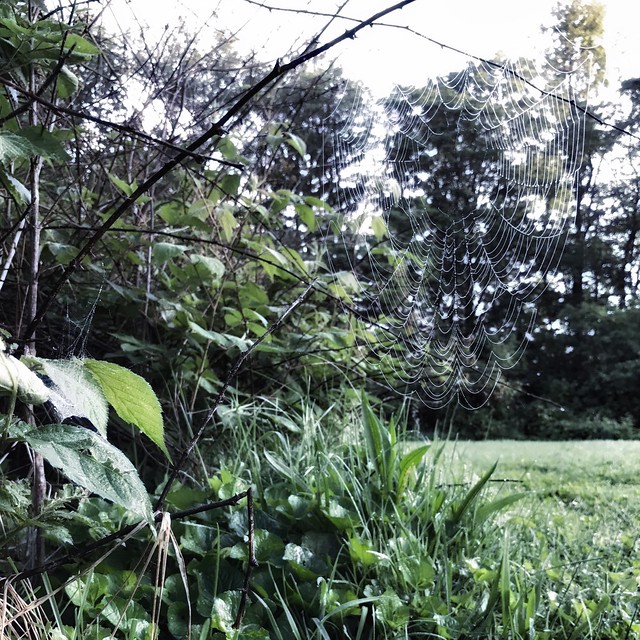 I took Thomas out to the back field this morning. There were hundreds of tiny spider webs in the grass, covered in dew. And then I saw this one, by the raspberry thicket, sparkling in the sunlight.