Here’s another lesson in why it’s important to research siblings, not just direct line ancestors. I had hit a brick wall on my Thompson line, after realizing that the link between my great great grandfather, William Thompson, and who I thought were his parents was bad.

This is what happens when you rely on other people’s research. Everything seemed reasonable, but when I looked closer, it was a flaming hot mess. So I removed a whole bunch of folks from my working tree and started over again. Thing is, there was very little to go on. Thompson is such a common name, and the only concrete info I had was that William was born in Atlanta and had a brother named Roy.

So after exhausting every avenue with William, I started looking at Roy. Lo and behold, I hit pay dirt. I had a scribbled note from either my mom or grandma saying that Roy had lived across the street from Beulah. Doesn’t sound like much, but it was. I was able to figure out that the W. Roy Thompson in the 1930 census was, indeed, “my” Roy, based on the street address.

There was another mom or grandma note that Roy had married a woman named Avis, and there she was with him, in the 1930 census. They were living at 1411 Beatie Avenue. I found my great great grandmother Estelle (Roy’s sister in law) living at 1412 Beatie Avenue in the 1910 census. Beulah was Estelle’s daughter and Roy’s niece. So there we have Roy living across the street from Beulah, albeit the time span was a bit long between the two events.

From there, I was able to piece together that Roy’s first name was Wiley, and I found his WWI draft card, where he lists his father as J. R. Thompson, living at 585 Lee Street.

That was enough of a clue to get me to the next generation back. James R. Thompson married Martha J. Edmonds. James fought in the Civil War (on the wrong side). His right arm was shot off below the shoulder at Sharpsburg, in 1862. He survived, so there’s a pretty large military pension file for him. For reasons unknown, he and Martha lived separately. I found her and Roy in the 1900 and 1910 censuses, and she’s listed as married, but no sign of James. I haven’t found him (yet) in any of the censuses, but I haven’t looked very hard, either. That’s something for another day.

I did some quick and dirty scanning of other people’s trees (always entertaining, but dangerous if you take it too seriously). It looks like that line goes back to Adam and Eve. I’ll stop tracing it when the real documentation runs out. Some of those trees I looked at had 10-12 “sources,” but when you look closely, they’re all “Ancestry member tree” or “Millennium File.” Run away from those. They are not fit to crib clues from. I promise, if you try, it will end in tears.

Oh, and everyone and his brother seems to think that William Thompson’s middle name started with a D. It was Boring. No idea where the D is coming from. He spells it out nicely on his WWI draft card, where he is inexplicably working as a cook in Washington DC. But the contact person he lists is Estelle Hoover at the same address I have her at, with my great grandfather Louis living with her, so I know it’s all legit. Just one of those strange family history mysteries.

And because I love a visual aid, here’s the new family group screen from Legacy. 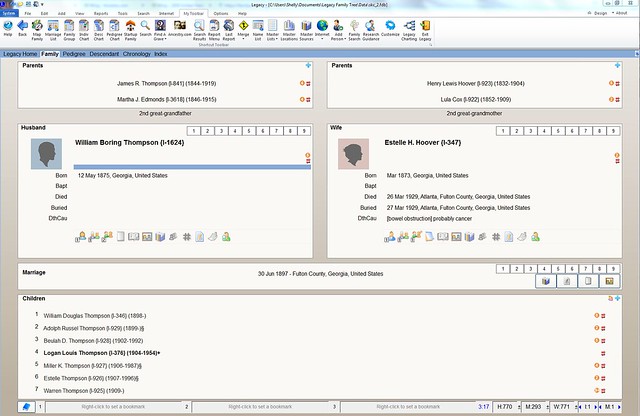 Now, for part two: City Directories. I love them so much it’s not even funny. I just found Martha J. Thompson, the newly discovered mother of William Boring Thompson and Wiley Roy Thompson, in the 1903 Atlanta city directory. She was living with William and his wife, Estelle, at 73 Kelly Street. Roy is also living with them.

There’s the final piece of evidence I needed to feel 100% confident that I finally had the right parents. 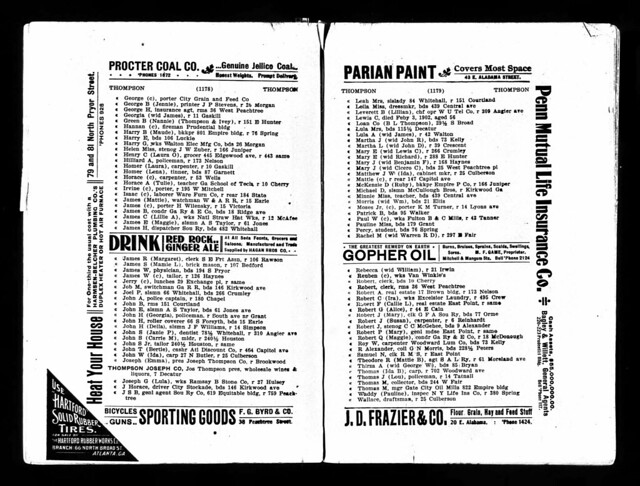 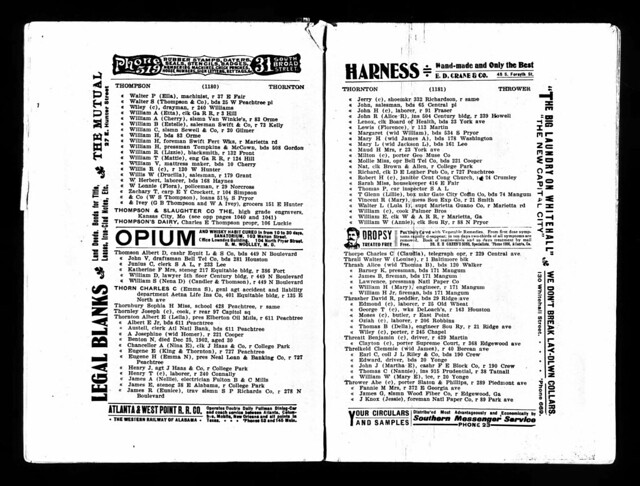 This, by the way, was two years after William Thompson and his brother in law, Adolph Taylor Hoover, were recorded in the Atlanta city directory as co-owners of a butcher shop (cleverly named W. B. Thompson and A. T. Hoover Meats). Apparently that business crashed in burned. Or maybe it was sold to a larger company, like Hormel.

[ETA: You may notice that Martha J. Thompson is listed as the widow of John R. in the 1903 directory. I have no explanation why, at this point. I know they were estranged, but she describes herself as married in the 1900 and 1910 censuses. Nor do I know why his name is listed as John in the directory, when everywhere else he’s James. For now, the address is the most important clue. The city directories are full of weird mistakes. As far as I can tell, James R. Thompson died in 1919, a year after he was listed as a contact person on his son, Roy’s, World War I draft card.]