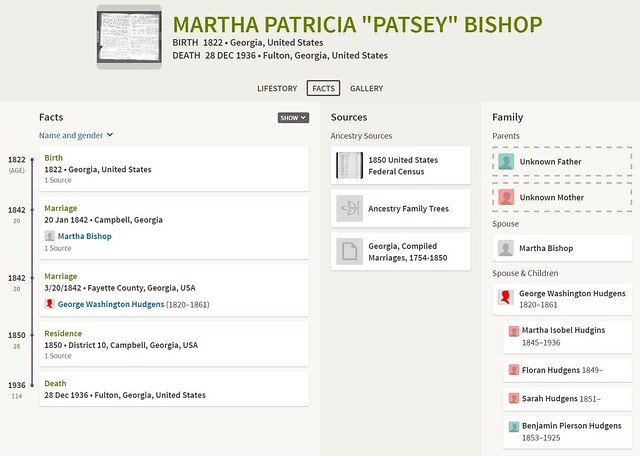 Someone has misunderstood the nickname convention for replacing M with P. Martha = Mattie = Patty = Patsy. That’s understandable, but when they then fabricates an additional proper name out of a nickname, I have to wonder about the quality of their research. Do they make other incorrect inferences?

So for the record, her name was only and ever Martha Bishop. Patsy/Patsey was just a nickname for Martha.

ETA: Also, that death date. It is absolutely not correct, but I have no i idea where it’s coming from. A bunch of member trees for Martha include it. The best I can tell is that she died between the 1900 and 1910 censuses. It’s possible she remarried after her second husband, Samuel Thompson, died. I doubt it, though.

Martha is, by the way, the unnamed wife in Samuel Thompson’s will. Martha is not, however, her own spouse. This tree is a giant hot mess.