In addition to my own family genealogy, I’ve been working on a One Name Study of the Basquill family. In sort, I’m collecting all the Basquills and trying to fit them together. Sometimes it’s easy going, but other times there just isn’t enough information to hold two threads together.

This is the situation I found myself in with the family of John Basquille and Mary Kerrigan. They aren’t “my” Basquills (as far as I know, at this point), so when I hit a brick wall with them, I wrote up some brief notes and let it go.

Today, as I was looking through some of the entries in the Irish death registry, I came across this record for a John Basquill of Lackaun who died in 1898 of influenza. He had been married, with his wife preceding him in death. Do you have any idea how many John Basquills there are in my one name study database? Even just looking at the ones in the Lackaun area with daughters named Bridget, it was impossible for me to figure out where he belonged.

But then I found that note I’d made. 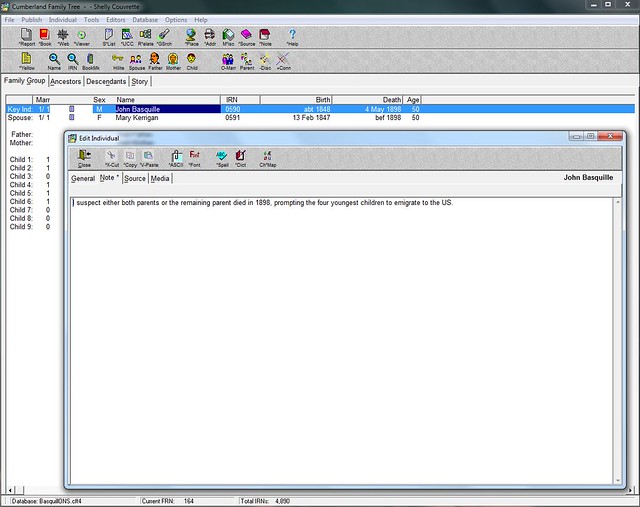 I’d wondered why the four youngest children had emigrated to the US when they did. I didn’t know for sure that their parents had died, but I couldn’t find anyone that fit their description in the 1901 or 1911 censuses. Emigrating seemed like an ill-advised venture, though, given that the kids did not fair especially well once they got here. One son ended up spending time in Willard State Hospital. (Yes, that Willard State Hospital.)

I would need more confirmation before I’d want to unequivocally state that this John Basquill is that John Basquille, but as a working theory, I’m going to go with it.