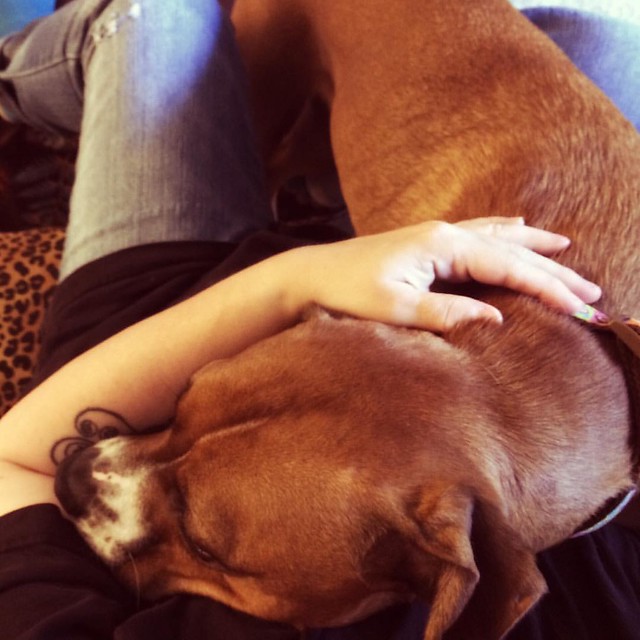 Thomas has been super affectionate lately. It’s like something suddenly clicked in his little pea brain, or maybe it’s the chilly weather. He spent about half an hour last night, half on my lap, just sucking up the attention. 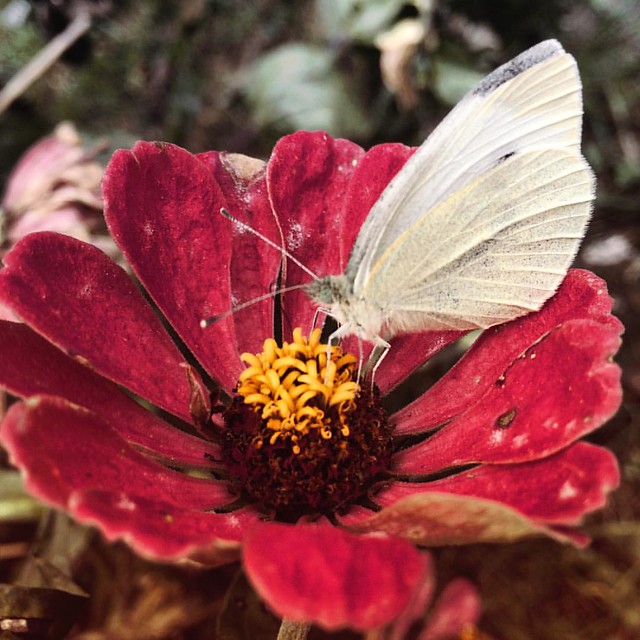 I should clear the garden, but there are still a few skippers and sulphurs showing up to feed on the tail end of my sad zinnias. 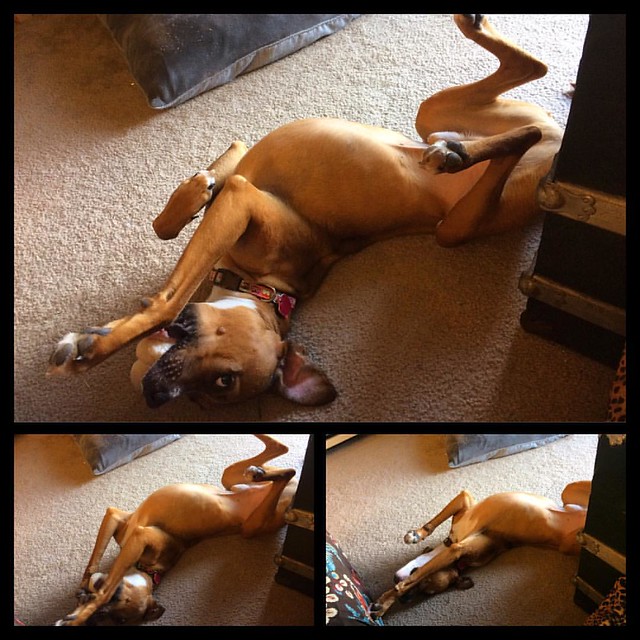 It’s been three months since I adopted Thomas. I think I’ll keep him.

I had to work today, but it wasn’t all bad. 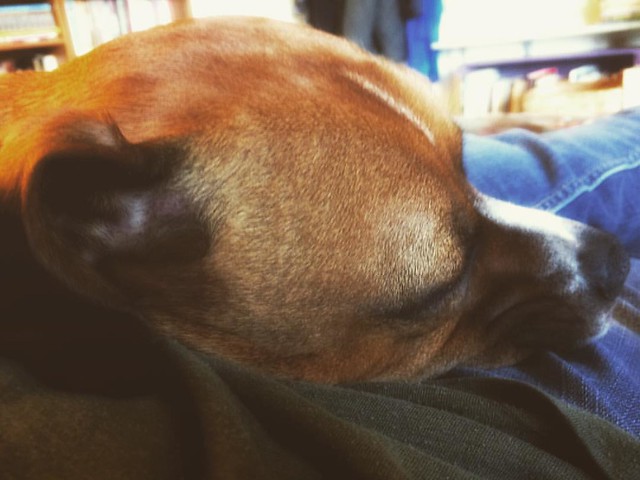 Sometimes he stops moving for five seconds, and it’s kind of lovely. Then other times, I wake up at 2:00 in the morning, and he’s under the bed, chewing on a sock. 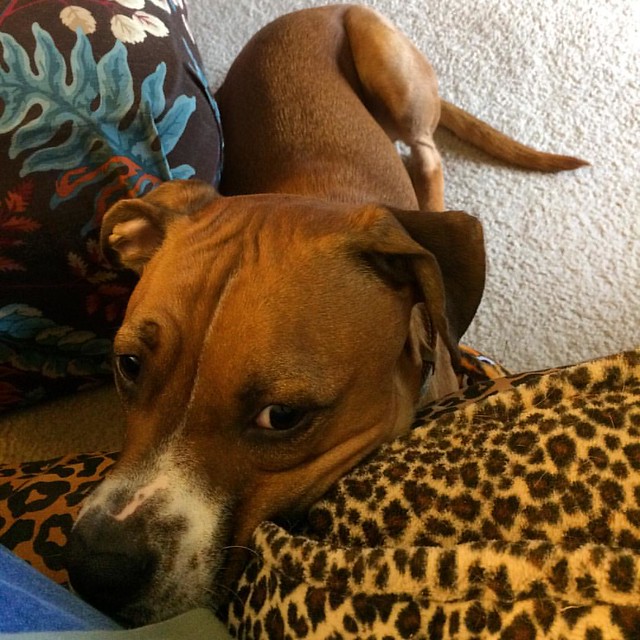 It works every time. 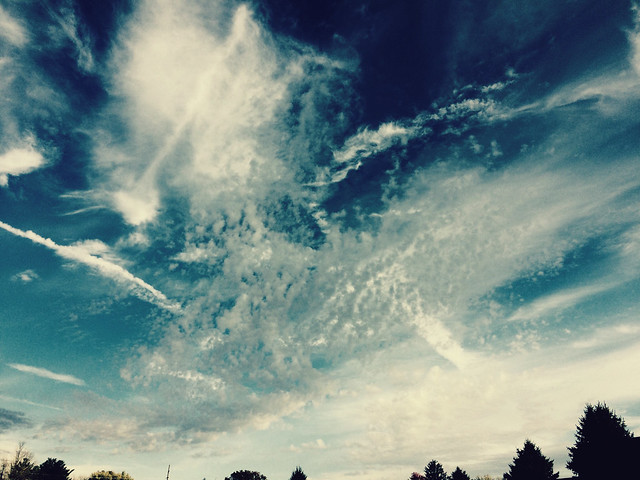 The weather the last few days has been glorious. It almost makes up for the awful rain last weekend.

I chose the right time to go get coffee.

Thomas and His Piggy 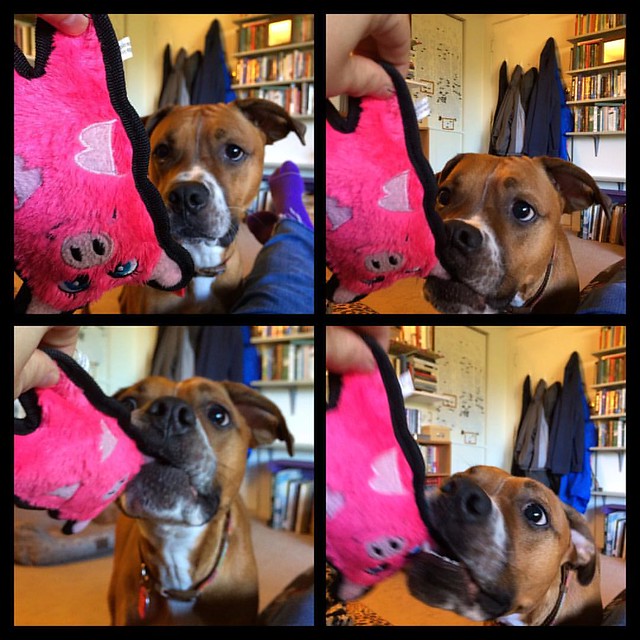 I fell asleep on the couch and woke up with a piggy in my lap and a dog sitting in front of me, staring. Thomas wanted to play tug with his stuffy.

This is the will of my great-great grandfather Walter Basquill’s sister, Margaret. She was the second wife of Thomas J. Burke, and she became stepmother to his two boys they married. One should be cautious reading too much into something like this, but I can’t help but wonder what the family dynamic was, given her bequests.

For context, Margaret and Thomas had four children of their own. Two died of tuberculosis: Thomas in 1910 at the age of 33 and Beatrice in 1911 at the age of 25. In 1912 her husband, Thomas, died of a stroke, caused by complications of a leg he broke in an accidental fall. He was 75. Margaret died in 1914 of a strangulated hernia, at the age of 59.

When she died, she had two surviving children and at least one surviving step-son, Michael. The step-daughter, Margaret, I had no knowledge of before finding this will. She must have been grown or perhaps farmed out to relatives, by the time Thomas married again.

I can’t find her Thomas will, if he had one. It’s possible that his children from his first marriage inherited enough from him that Margaret felt she didn’t need to give them more than a token. But what an odd thing to do. I have to think there was a story there, and that Margaret’s bequests to her step-children were deliberately unkind. 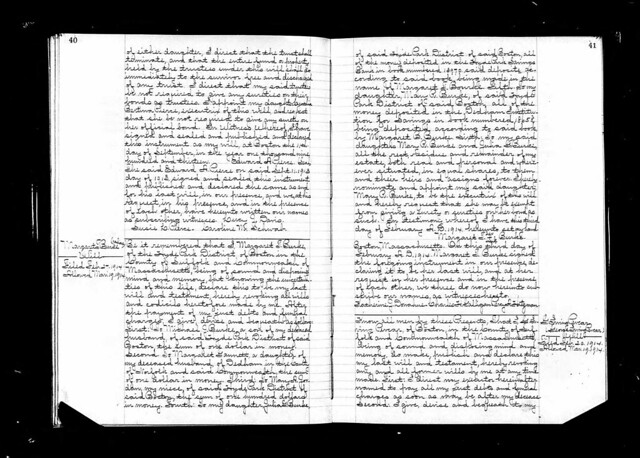 Be it remembered that I, Margaret T. Burke, of the Hyde Park District of Boston in the County of Suffolk and Commonwealth of Massachusetts, being of sound and disposing mind and memory, but knowing the uncertainties of this life, Declare this to be my last will and testament, hereby revoking all wills and codicils heretofore made by me. After the payment of my just debts and funeral charges, I give, devise and bequeath as follows:

Margaret T Burke (her mark)
Boston, Massachusetts. On this third day of February A. D. 1914, Margaret T. Burke signed the foregoing instrument in our presence declaring it to be her last will, and at her request in her presence and in the presence of each other, we three do now hereunto subscribe our names as witnesses hereto.
Katherine J. Donahue, Charles H. Galligan, Percy A. Hatzmen”