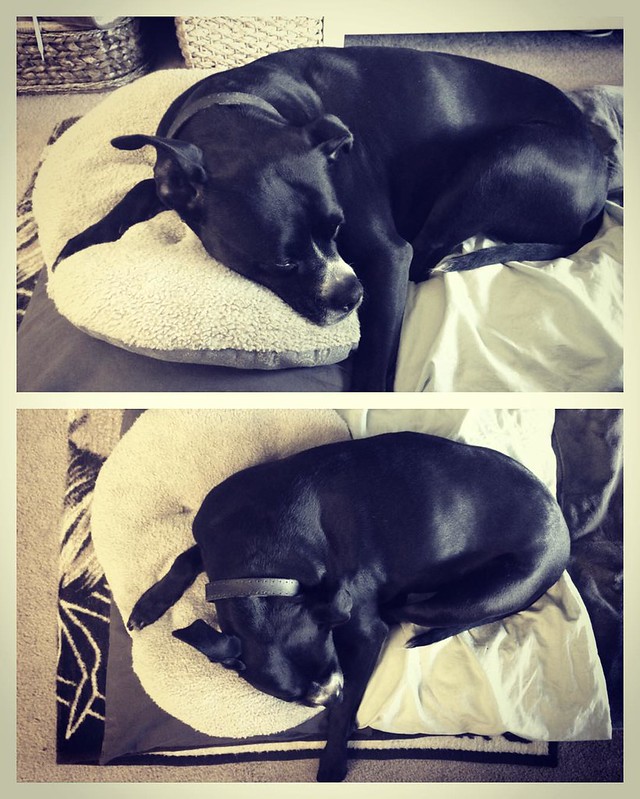 Frances went to the vet today. I was really hoping that we’d get to her spring check-up without her having any issues, but that’s just not how she rolls. She tweaked something in her back end last Tuesday. I came home from work and she could barely walk. I thought it was her knees, and they’re clearly sore, but after giving her a thorough physical and neurological exam and taking X-rays (to rule out compressed or ruptured discs), the vet thinks she’s pulled her iliopsoas.

But it’s also her knees. And it’s also the arthritis in her spine. And it’s also a disc that looks like it’s slightly compressed. She’s got a cocktail of things that, mixed together, have made her a very, very sad petunia.

The good news is that it’s not cancer! Bed rest and meds will hopefully have her feeling better soon, though with an injury like this, the recovery time is usually at least 6 weeks. And that’s in a young dog. Oldladydogs take longer to heal.

She’s permanently barred from getting on the furniture, which makes me sad, but I suspect she injured herself jumping off the couch to yell at dogs walking by the patio. I’m also going to have to put up a visual barrier along the bottom of the patio windows, to keep her from getting agitated at every single thing she sees.

For now, though, she’s spending a lot of time on her tuffet.