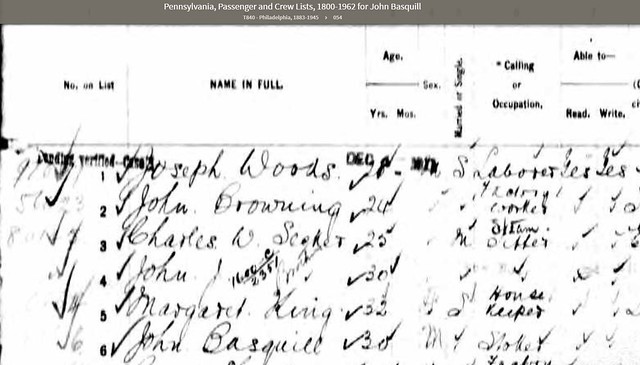 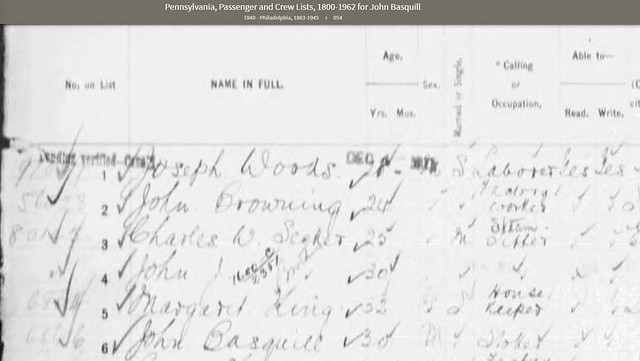 I posted this in one of my genealogy groups, but I’m going to repost it here as a general warning, using John Basquill again.

This was prompted by an earlier discussion in one of my genealogy groups on images at Fold3 vs Ancestry, and how the Fold3 images were darker and, to some eyes, contained less information. I stated at the time that the opposite was true, and that I’d recommend turning off image enhancement at Ancestry, because you can lose valuable information if you don’t. Here’s an example.

One image with Ancestry’s image enhancement turned on (top), and one with it turned off (bottom). If you leave image enhancement turned on, you’d never know that there were contract ticket numbers in the left column of this manifest. You may not find those numbers important, but I’ve been able to use them to track an individual (and in the process fill in knowledge gaps) through multiple manifests where she failed to board the ship. Some of those manifest entries are crossed out, but the information in them helped me connect her to two different sisters living in the US and also to the townland she came from, which led me to her birth register entry and her parents’ names. All because I noted the contract ticket number and used it to collate several manifest entries.

The image on top may be prettier, but it is missing valuable information.