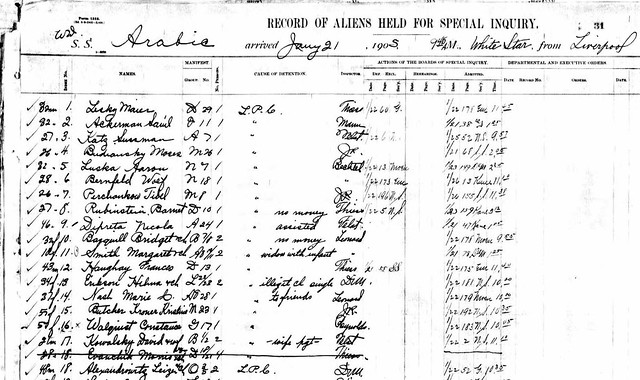 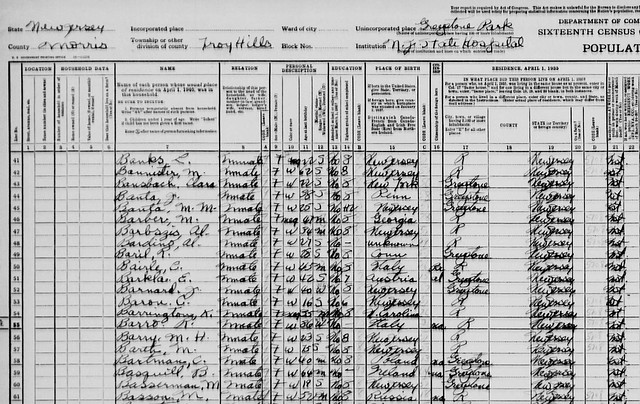 Bridget Agnes Groarke was born 28 Oct 1869 in (as far as I can make out deciphering the handwriting) Cloonacannana, County Mayo, Ireland. She married James Basquil, the son of John Basquil and Mary Haran, on 19 Feb 1900 in the Catholic Church at Swinford, County Mayo. On 13 Feb 1902 their only child, Patrick John, was born in Lisheenabrone, County Mayo.

Those are the dry facts. For some as yet unknown reason, Bridget and her son emigrated to the US in 1905 and settled in Newark, New Jersey. Her sister, Catherine, had married a man named Fred Hymers, and they also lived in Newark. Surely there was more to the story that just that, though? Bridget followed through on all the steps to naturalization and took the oath of allegiance on 11 Dec 1933. In her naturalization paperwork, she says that her husband, James, resides in Darlington, England. What happened between them? As far as I can tell, they had no personal contact after she came to the US.

I have so many questions! When Bridget and Patrick arrived here, they were detained because Bridget had no money with her, despite there being a notation on the ship’s manifest that she possessed $5. Bridget is on line 10 of the first image, and you can see the notation L.P.C., meaning “Aliens likely to become public charges.” She was finally allowed in to the country, but she hadn’t had family here already, willing to take responsibility for her, she could have been refused and returned to Ireland.

Still more questions! If you look at the second image, you can see it’s from the 1940 US Census. Bridget is on line 59. The image quality isn’t great, but you should be able to make out that she’s an inmate at the New Jersey State Hospital. A “public charge,” indeed. What happened? And where is her son, Patrick. Tracking them both using city directories and censuses, it looks like they were together right up until 1934, then in 1935 she’s an inmate at Greystone Park (AKA New Jersey State Hospital). As far as I can tell, she spent the rest of her life there. She died in 1954 and was buried at Evergreen Cemetery, in Morristown, New Jersey.