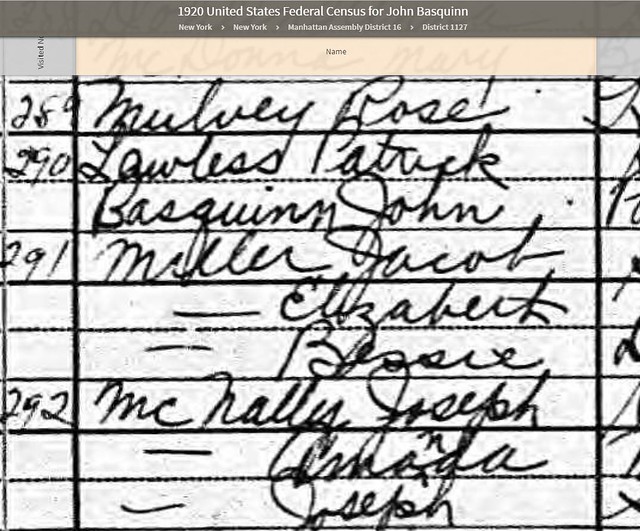 Here’s another tip: Before disregarding a record because it has the wrong name on it, consider if that name makes any sense. Basquin/Basquinn is not a name you’d find in Ireland. It simply doesn’t exist. If you search the Irish census records, you won’t find the name, period. If you search Ancestry globally for basquin* born Ireland, you will find a handful of records, all of which are either transcribed incorrectly or you can see that an enumeration mistake was made and the country of origin was France.

For example: In the 1860 US census there’s a Kate with no last name given, born Ireland, working in New Orleans as a servant in the home of a French family named Basquin. I’d bet money her name was not Basquin, but whoever the informant was had no idea what her surname was and likely didn’t care. She was just a servant, right? Then when the record was transcribed, the blank was interpreted to mean that her name was Basquin, too.

So. Here we have John Basquinn, born Ireland about 1873, living in New York City, and working as a construction laborer. I guarantee you this is Walter Basquill and Mary McHugh’s son, John. How his name was recorded as Basquinn will remain an eternal mystery.