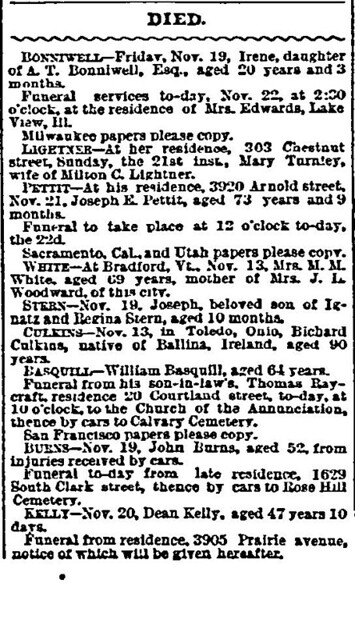 Here’s another puzzle. I had a vague recollection that, while every person with an Ancestry tree for the family I’ve been working on thinks the daughter, Bridget, married a man named Thomas Raycraft and moved to Chicago, I had doubts. But I couldn’t remember why.

According to this death notice, Thomas Raycraft was William’s son-in-law. That means that the Bridget who married him cannot be the daughter of Patrick Basquill and Ellen Cannon, right? I have no idea what happened to Patrick’s Bridget. I haven’t even started digging into this mess.

Also notice that there is a request for San Francisco papers to please copy. I think this means that the John Basquill registered to vote in San Francisco in 1877 is the son of William and Anne, NOT Patrick and Ellen. It would make sense, if William’s son were in San Francisco in 1880, that the family would want to get word to him of his father’s death, and this might be the quickest method of doing so.

I thought I’d spend the next few days working on Bridget, but maybe not, if she’s not the droid I’m looking for.

The sky this morning wasn’t very showy, but it was still lovely.