A Child Scalded to Death 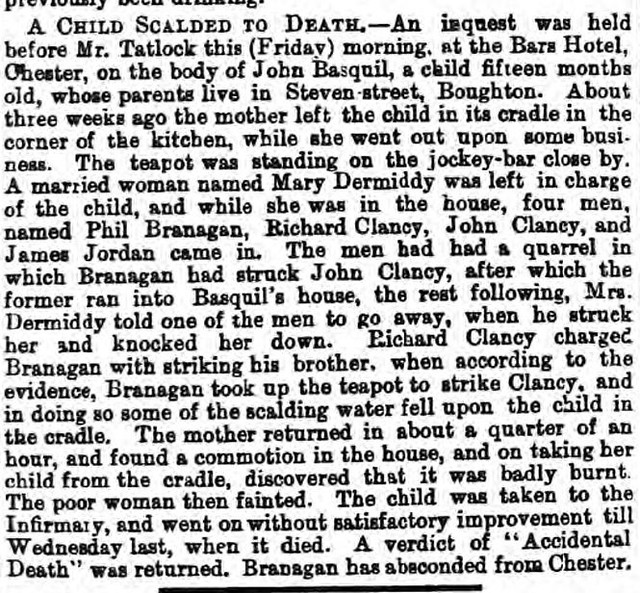 “A CHILD SCALDED TO DEATH.– An inquest was held before Mr. Tatlock this (Friday) morning, at the Bars Hotel, Chester, on the body of John Basquil, a child fifteen months old, whose parents live in Steven street, Boughton. About three weeks ago the mother left the child in its cradle in the corner of the kitchen, while she went out upon some business. The teapot was standing on the jockey-bar close by. A married woman named Mary Dermiddy was left in charge of the child, and while she was in the house, four men, named Phil Branagan, Richard Clancy, John Clancy, and James Jordan came in. The men had had a quarrel in which Branagan had struck John Clancy, after which the former ran into the Basquil’s house, the rest following. Mrs. Dermiddy told the men to go away, when he struck her and knocked her down. Richard Clancy charged Branagan with striking his brother, when according to the evidence, Branagan took up the teapot to strike Clancy, and in doing so some of the scalding water fell upon the child in its cradle. The mother returned in about a quarter of an hour, and found a commotion in the house, and on taking her child from the cradle, discovered that it was badly burnt. The poor woman then fainted. The child was taken to the Infirmary, and went on without satisfactory improvement till Wednesday last, when it died. A verdict of “Accidental Death” was returned. Branagan has absconded from Chester.”

John Basquill was the son of Mark Basquill and Catherine Lalley. He was the third child of theirs to die as a baby.

It can be easy to forget, when you’re looking at mountains of birth, marriage, and death records, that those bare facts belong to real people with real stories to tell. I’ve known for years that Mark Basquill and Catherine Lalley had lost their son, John, at a young age. I had no idea how or why.

Another son, Mark, died at age 11, and a daughter, Catherine, at 18. That’s five children who died young, most as babies. Of the two oldest children, one daughter named Mary emigrated to Massachusetts but soon of enterocolitis and exhaustion. She was just 26. Another daughter, Margaret, was born in 1859 and was recorded in the 1871 England census, but I can’t find any trace of her after that point. It’s possible she emigrated to the United States or married, before the 1881 census.

Out of seven children, I can find evidence for only one of them reaching adulthood.