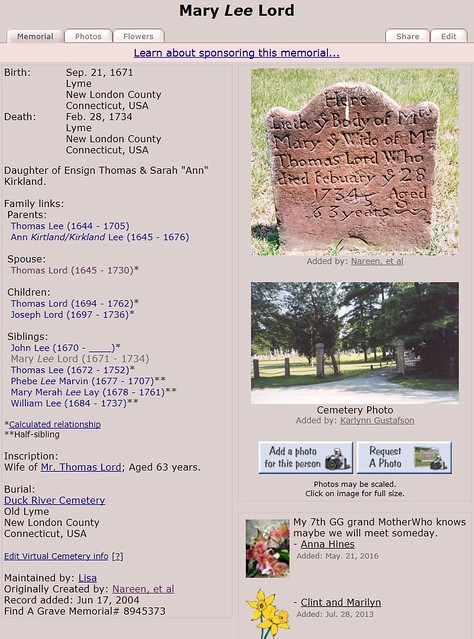 First, I’d like to point out that this is the first grave marker I’ve encountered with double dates. How cool is that? I’ve seen them on probate documents and wills, but never on a grave marker.

I also want use this memorial as a cautionary tale. The marker is, indeed, for Mary (or Marah), the wife of Thomas Lord. But someone has unhelpfully added misinformation that perpetuates a widespread tale of make-believe. You can see the problem easily, if you look at the supposed siblings of Mary. There are two of them! That is not something that would have happened. It’s possible that Thomas Lee had more than one daughter named Mary (with either or both of his wives), but not that both of them lived to adulthood. That only happens when a younger child dies, then the name is reused on the next child of the same sex. Or if you’re George Foreman. Neither of those is the case here, though.

So the Mary/Marah who married Thomas Lord is unidentified. We don’t know who her parents were.

Also! If you click through to the Findagrave memorial for Mary, then click the link for Thomas Lord’s memorial, you’ll see yet another work of fiction. Thomas’ father was William Lord, but his mother was not Harriet Nickerson. I don’t know who she was, but the Harriet Nickerson question was pretty well disproved.

Basically, this is what you might call a hot mess.