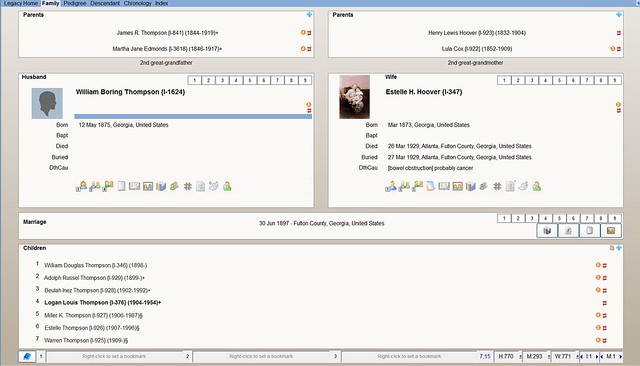 I spent part of the weekend trawling old newspapers, and I hit the jackpot. I had finally identified my 3rd great grandfather, James R. Thompson, by tracing my great-great grandfather’s brother. Branching out pays off, eventually.

James was born in 1844, in Georgia, so he should have Confederate military records. And I did find a pension packet for a James R. Thompson, living in Atlanta, who was the right age. The only problem was that I couldn’t tie the two together, to prove they were the same person. The main thing holding me up, and it’s still bizarre, is that on later censuses James did not identify himself as a war veteran or as disabled. The man whose pension packet I found lost his right arm at the battle of Antietam. Weird, right?

But then I found some mentions in the Atlanta Constitution that linked everything together beautifully. I already knew, from carefully tracing backwards through the Atlanta city directories, where the family had lived and some of the jobs James had had. When the family first settled in Atlanta, he worked as a night watchman at Oakland cemetery and at a nearby railroad crossing. And apparently he was a bit of a gentleman farmer, as well.

I also found notices for bankruptcy and a marshal’s sale, where their home was foreclosed on due to a tax lien. The family was well off before the Civil War, but never recovered afterward. And I have to wonder what affect the war had on him. He periodically disappeared from his family. His wife, Martha, was listed for several years as a widow in the city directories. And then he’d show back up again. That had to be hard for everyone.

He seems to have been quite a character, though. Reading between the lines, he wasn’t too bothered by a little bit of scheming, and he was quite willing to shoot to kill. Apparently being one-armed didn’t slow him down much. 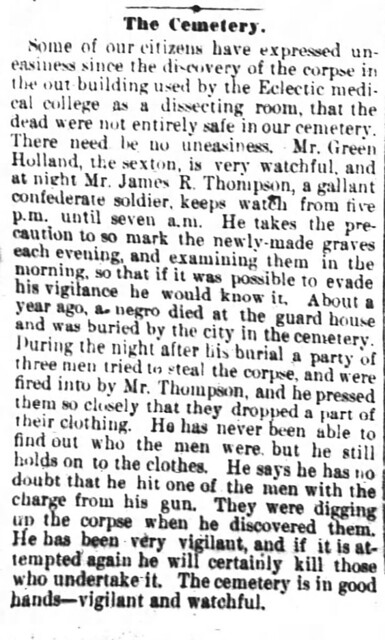 Some of our citizens have expressed uneasiness since the discovery of the corpse in the out building used by the Eclectic medical college as a dissecting room, that the dead were not entirely safe in our cemetery. There need be no uneasiness. Mr. Green Holland, the sexton, is very watchful, and at night Mr. James R. Thompson, a gallant confederate soldier, keeps watch from five p.m. until seven a.m. He takes the precaution to so mark the newly-made graves each evening, and examining them in the morning, so that if it was possible to evade his vigilance he would know it. About a year ago, a negro died at the guard house and was buried by the city in the cemetery. During the night after his burial a party of three men tried to steal the corpse, and were fired into by Mr. Thompson, and he pressed them so closely that they dropped a part of their clothing. He has never been able to find out who the men were, but he still holds the clothes. He says he has no doubt that he hit one of the men with the charge from his gun. They were digging up the corpse when he discovered them. He has been very vigilant, and if it is attempted again he will certainly kill those who undertake it. The cemetery is in good hands—vigilant and watchful. 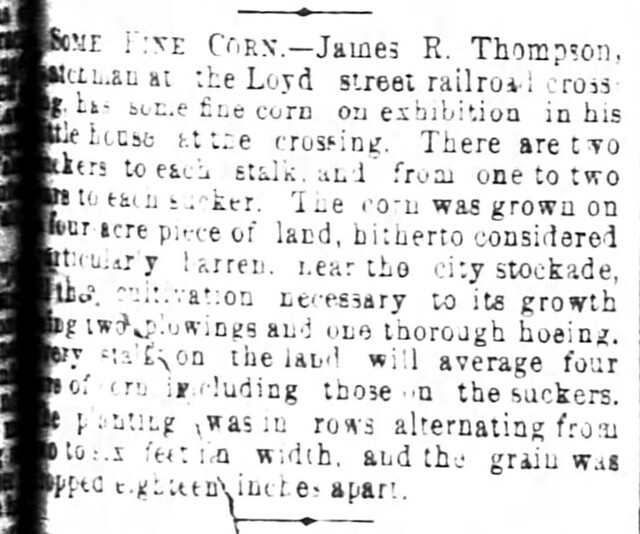 SOME FINE CORN.—James R. Thompson, watchman at the Loyd street railroad crossing, has some fine corn on exhibition in his little house at the crossing. There are two suckers to each stalk, and from one to two ears to each sucker. The corn was grown on a four acre piece of land, hitherto considered particularly barren, near to the city stockade, all the cultivation necessary to its growth being two plowings and one thorough hoeing. Every stalk on the land will average four ears of corn including those on the suckers. The planting was in rows alternating from two to six feet in width, and the grain was [?] eighteen inches apart.

James R. Thompson, the one-armed watchman, at the Loyd street crossing, who is paid by the Richmond and Danville and Georgia railroads, asked the city to add a pittance to his salary,

About seven hundred and ten pensions have been paid up to date, which means that about forty-three thousand dollars has been paid out to the old men who wore the gray.

A very interesting and pitiable case came up yesterday before the governor and Colonel Tip Harrison in the way of a pension claim.

Mr. James R. Thompson, of this county, went to the pension office with a claim for a pension of $100. He lost one of his arms at the battle of Sharpsburg, in Maryland, and has a good right to his pension. He is said to have been a most valiant soldier and never knew what fear was however thick the bullets came.

Several weeks ago Mr. Thompson drew a widow’s pension of $100 for Mrs. Fannie Guice, whose husband was a brother-in-law to Mr. Thompson. He claims to have gone to a good deal of trouble getting up statistics as to when and how Mr. Guice was killed so that he could get the pension for Mrs. Guice, who constituted him as her representative.

But, Mrs. Guice died just a few weeks before the pension was paid, and the law says no pension shall be paid to a widow’s credit after death.

Mr. Thompson did not say the woman was dead when he drew her pension, but Colonel Tip Harrison found it out later and determined not to let Mr. Thompson have his own pension when the time came.

Mr. Thompson presented his claim yesterday for his own pension. It amounted to $100 exactly the amount of the widow’s pension he had drawn.

Colonel Harrison refused payment on the ground that Mr. Thompson had drawn the widow’s pension illegally and the state had to take his own pension to get even.

Mr. Thompson stoutly kicked against such procedure. He claims that he turned over the widow’s pension to her daughter, and did not know that he had drawn a pension illegally. He says that he doesn’t intend to be deprived of his own pension in any such fashion. He says the widow’s pension, according to the act of legislature, had been due, anyhow, nearly a year before he got it, and the payment having been delayed because there was no money in the treasury. But, he says, however that may be, he will have his money if he has to take the matter before the next Georgia legislature.

Surely, Mr. Thompson has been playing in bad luck to say the least of it. The case is an interesting one, however, it may be decided.