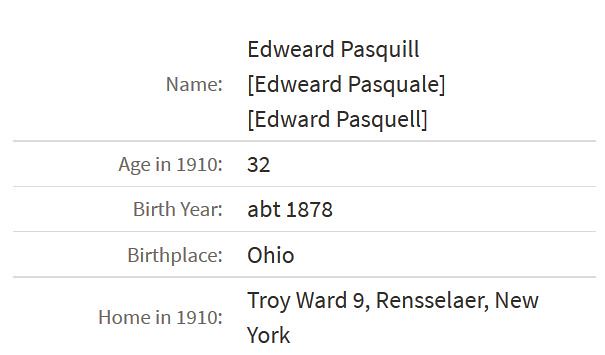 I had a hell of a time finding this census record. I found an as yet unmarried Edward in the 1905 New York State census, and I found him with wife Mary, three children, and Mary’s mother in the 1920 United States Census. Both times he was living in Troy, New York. I thought it was unlikely (though possible) that they would have been living somewhere else at the time of the 1910 census, so I started searching for Edwards who were born in Ohio around 1878. Though you can see in the index entry that someone has corrected the spelling of the first name, it wasn’t coming up for me.

And obviously, searching for either Basquill or Basqu*l* wasn’t going to help, either. I finally left both name fields blank and searched Troy, Rensselear, New York for all people born in Ohio within five years of 1878. I thought that might be too big a net, but I was out of alternatives for narrowing it. It worked, though. There he was, with the last name of Pasquill. An easy mistake for an enumerator to make, because P and B sound similar.

Normally I’d switch to searching for one of the children or his wife, but the children were all born after the 1910 census, and I don’t yet know when he and Mary were married. Now that I’ve found them together in the 1910 census, I can narrow my guess for a marriage date to sometime between 1905 and 1910.