So many questions answered! I found this young man and his younger sister Mary in the 1870 census, living in Jackson, Ohio, with John Basquill and his wife, Margaret Daughan. I knew the two kids were related to Margaret, but HOW? John Daughan was 13 years younger than Margaret, so that’s a big stretch, but not impossible, if they were siblings. But they could also have been Margaret’s niece and nephew or even cousins. Without more information on the kids, I just couldn’t hope to figure it out. (I have zero information on Margaret, before her marriage to John. Partly because the last name has been recorded as everything from Daughan to Dugan to Vaughn. I found John’s and Margaret’s marriage license, but no parent names were listed. Meaning that tracing the relationship of the kids to Margaret, via her family, is so far impossible.)

So I searched the Chronicling America website at Library of Congress, and I found this obituary. Such a horrible story. John was only 27 when he died. But it confirms that the John Daughphine (see what I mean about the name?) I found in the 12 Jun 1880 census, who was living with the James Carr family, is “my” John (James’ daughter Susan was living in the same household). And that, along with the obit, confirms that the 7 Sep 1880 marriage license I found for John Daughan and Susie Carr, is for “my” John, too.

This may not pass the genealogical proof standard (three sources for each fact), but I think it’s pretty convincing evidence. 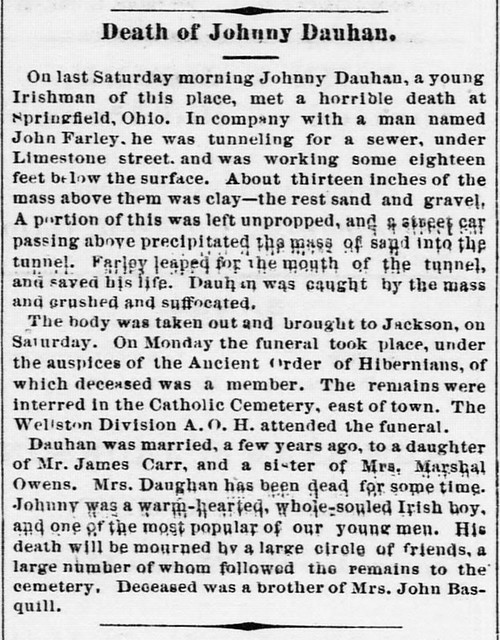 On last Saturday morning Johnny Dauhan, a young Irishman of this place, met a horrible death at Springfield, Ohio. In company with a man named John Farley, he was tunneling for a sewer, under Limestone street, and was working some eighteen feet below the surface. About thirteen inches of the mass above them was clay — the rest sand and gravel. A portion of this was left unpropped, and a street car passing above precipitated the mass of sand into the tunnel. Farley leaped for the mouth of the tunnel, and saved his life. Dauhan was caught by the mass and crushed and suffocated.

The body was taken out and brought to Jackson, on Saturday. On Monday the funeral took place, under the auspices of the Ancient Order of Hibernians, of which deceased was a member. The remains were interred in the Catholic Cemetery, east of town. The Wellston Division A.O.H. attended the funeral.

Dauhan was married, a few years ago, to a daughter of Mr. James Carr, and a sister of Mrs. Marshal Owens. Mrs. Daughan has been dead for some time. Johnny was a warm-hearted, whole-souled Irish boy, and one of the most popular of our young men. His death will be mourned by a large circle of friends, a large number of whom followed the remains to the cemetery. Deceased was a brother of Mrs. John Basquill.