i have this bible i do not need. i have a new one. we are christian. please state time of pick up. i will leave in bag under our carport. [location redacted] thank you and god bless…

WTF?! So, apparently Catholics are not really Christian, and nor are their Bibles. And while I may not be the most respectful of people where religion is concerned, I’m pretty sure I wouldn’t leave a Bible sitting outside, under the carport. GOD BLESS!1!!!1!eleventy-one!1!1!!! 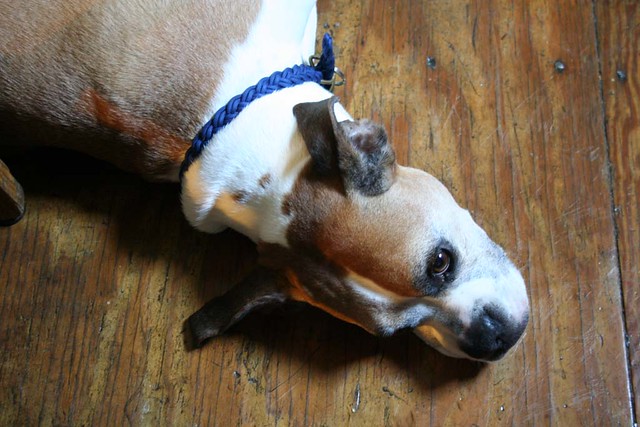 I think, by now, the entire world knows that Harriet is useless. This morning, there was a knock on my door. Harriet ignored it. When I answered it, there were two Jehovah’s Witnesses on my doorstep, waiting to ask me if I’d ever really thought about the significance of the story of Noah and The Flood. I have a feeling that any time of day would be too early to have that particular discussion, so I told them I’m Catholic and that I’d pray for them.

Anyway, Harriet. She’s useless. The least she could have done is bark a couple of times to scare them away, but nooooooo, she was too busy getting her beauty rest.

I’m not particularly religious, but if you can’t make posts containing Bible verses on Sunday, then when can you make them?

There’s some faint text below the verse, but I can’t make it out. 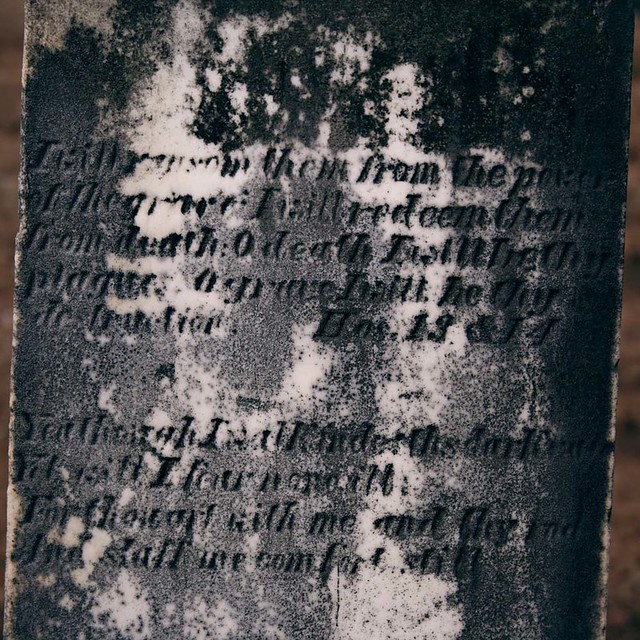 I will ransom them from the power
of the grave; I will redeem them
from death; O death I will be thy
plagues; O grave I will be thy
destruction. Hos. 13 & 14 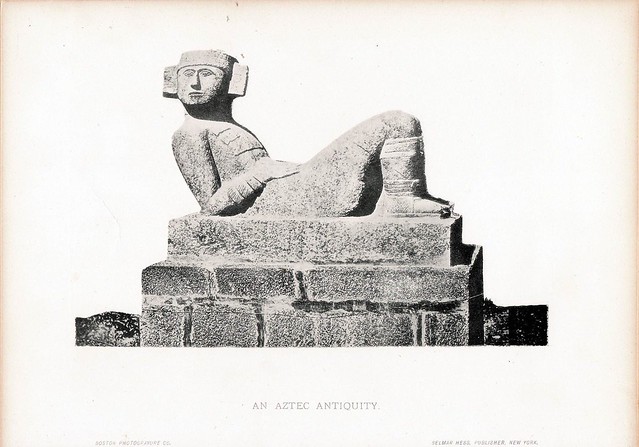 I forgot I had this. I unearthed it while digging through a box of ephemera, looking for old maps to cannibalize for collage. It was given to me by the director of the art museum when I was researching objects from their Precolumbian collection. The engraving is of a Chacmool excavated by Augustus Le Plongeon at Chichen Itza in 1875.

Chacmool are a type of Precolumbian stone figures thought to be associated with ritual sacrifice. They are found in Mesoamerica, and always take the form of a recumbent human with arms and legs drawn up and head facing to the side. The hands, which rest on the stomach, hold a vessel that would presumably contain sacrificial offerings. 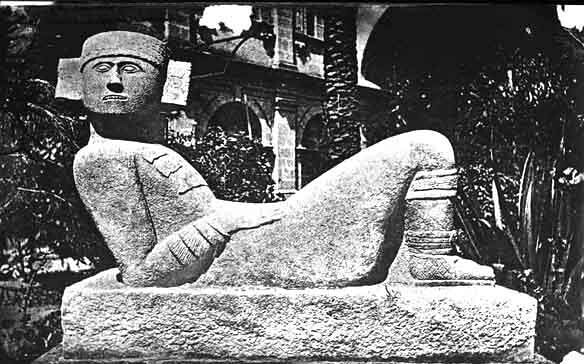 Chacmool excavated by Augustus Le Plongeon (1825-1908) from the Platform of the Eagles and Jaguars at Chichen Itza, Yucatan, 1875

If you are looking for an amusing way to waste time, check out Conservapedia‘s random page generator. You’ll laugh, you’ll cry, it’s simultaneously better and worse than Cats.

Who else could distill Athenian democracy down to five sentences?

I think I mentioned recently that, while in the shower, I couldn’t remember whether or not I’d already just washed my hair? Well, I had a similar experience this morning. As I was putting shampoo on my hair, I suddenly realized that I’d already washed it. Twice. Third time’s a charm, right?

Have you ever been mesmerized by television you did not intend to watch? Meet Mother Angelica. She has a daily half-hour rosary-along show on the Catholic channel. 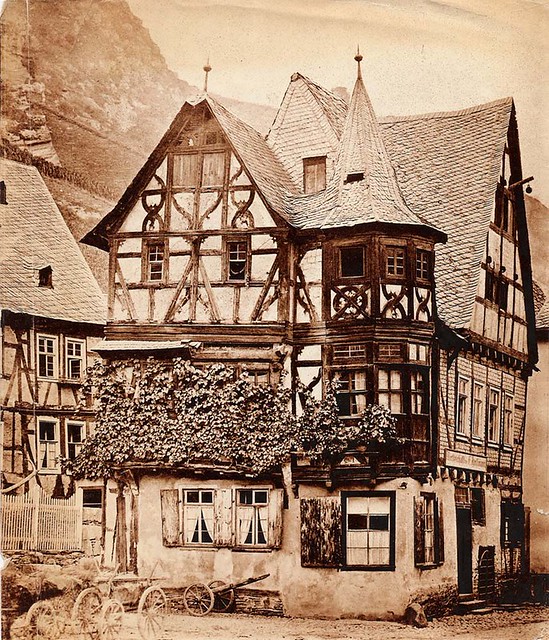 The half-timbered Altes Haus (old house) is from the Medieval period. Built in 1368, it is the oldest extant building in the Rhine Valley town of Bacharach. The town itself was named after the Roman god Bacchus (who was based on the Greek god, Dionysos), so it is only fitting that the Altes Haus now houses a Weinhaus. (Literally “wine house,” a Weinhaus is a restaurant specializing in wines.)

This image is part of the set of sepia tone photos of German landmarks that I found in an old book. The photo was likely taken between 1880 and 1890, based on dates from other pictures in the group. 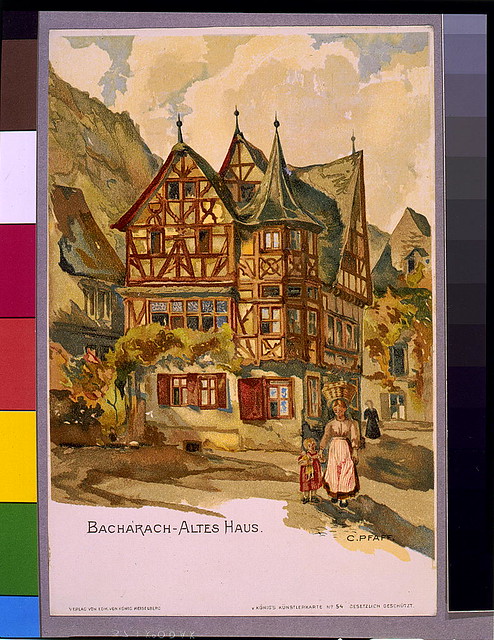 Also, in keeping with the holiday theme, Going Jesus presents these homages to sublime tackiness:

Brought to You By…

I watched 16 Children and Moving In last night. I’ve mentioned that I like a good horror story? Well, not only is the thought of having kids–much less 16 of ’em–horrifying, but the family the show was about squicks me out, too. The Duggars are ultra conservative fundamentalists, belonging to what is known as the Full Quiver, or Quiverfull, movement (Providentialism, if you’re Catholic).

Full Quiver proponents believe that children are a blessing from God, and that all forms of contraception–even NFP–are an abomination. Quiverfulls demonstrate their submission to God by maintaining “continual openness to children.” God alone has the power to “open and close a woman’s womb.” Any effort to interfere with his plans is a usurpation of his divine power.

Quiverfulls adhere strictly to biblical patriarchal values, wherein the male is the authoritarian head of household and the woman submits to him in all things. Women pursue traditional roles as homemakers, nurturers, and teachers. Quiverfulls–the mothers, anyway–commonly home school their children in order to limit their access to outside influences.

Quiverfulls believe they are raising an army for God. To them, children are weapons in a cultural arms race. They see it as their duty to out-breed the brown heathens of the world, and they’re not shy about making their motives clear. Quiverfulls fear a world in which white, Christian men are not at the top of the food chain, and they aim to make sure that doesn’t happen.

So, anyway, this is all a lengthy, round-about way of getting to my point: One of the sponsors of the show was NuvaRing. I about peed my pants laughing.