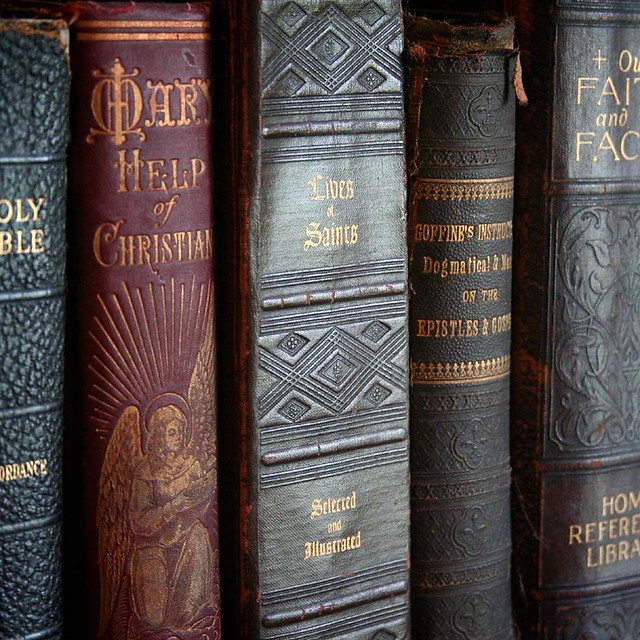 I love old books, and somewhere near the top of the list of old books I love are old Catholic books.

In fishy news, the algae in my aquarium was starting to get a little out of control, so I finally broke down and bought a pleco. He’s feisty and he’s grumpy as hell, so of course I adore him. And he’s small enough that he won’t mess with the other fish. Yet.

I had to go to four stores before I found a CF card. Target, Kmart, and even Staples were out. On a whim, I stopped at CVS, because you never know what sort of weird crap you’ll find at a drugstore. And, besides, I was out of aspirin. They had one CF card in stock 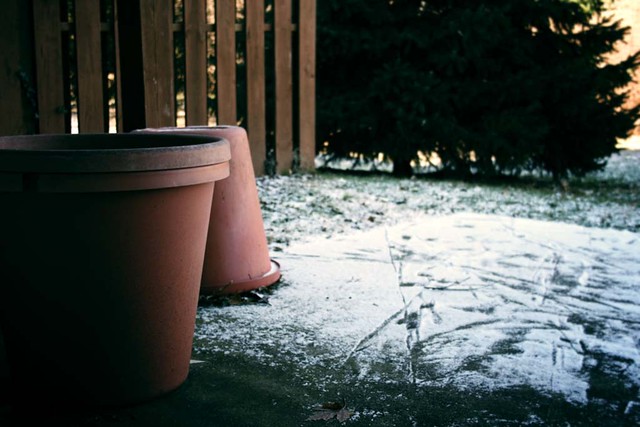 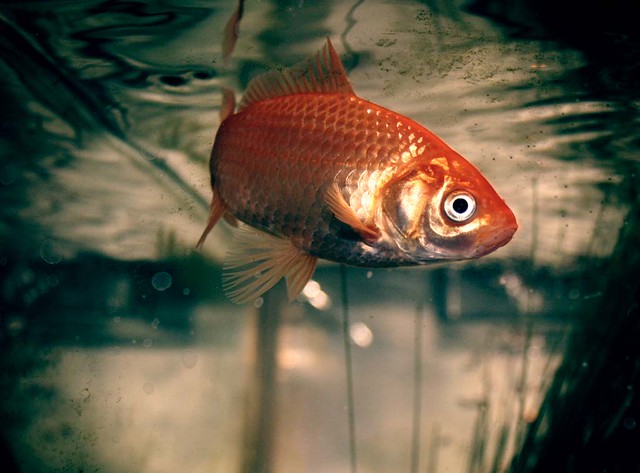 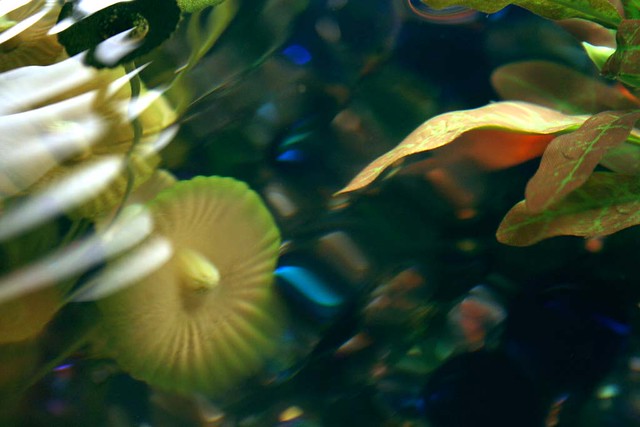 These have had some Photoshopping, because I’m shameless that way. I also turned on the EXIF display in Coppermine. I’ve always used Photoshop’s “save for web” function, which strips out the EXIF data, but I think I’ll start using “save as,” instead, so that it’s preserved.

I have a feeling this is going to be a steep learning curve.

I finally got around to buying my poor fish some aquarium plants this morning. I briefly considered getting a Betta (I just absolutely adore them), but was too disgusted by the way the fish at PetCo looked. One entire display of Bettas was dead, and another was about 75% dead, with the live ones looking near to it. Their fins were all clumpy, which is from some disease that I can’t remember the name of.

I realize I got there at opening time, and that the little PetCo elves were still running around doing cage cleanings and feedings, and I’m sure they would’ve pulled the dead fish off the floor eventually. But, that’s not the problem. That many dead fish indicates that something is very wrong.

Ugh. That is just one of many reasons I don’t shop there unless I really need to. If there were anywhere near me that carried aquarium supplies (and that didn’t sell puppies and kittens!), I’d shop there. As it is, PetCo now has ferrets, in addition to birds and rodents and lizards. And the cashier said that the ferrets had come in sick, too. Not cool.

So now I feel even worse about spending $30 at their store. I shouldn’t have done it, but I was starting to get a serious guilt complex about my poor fishes’ naked aquarium. 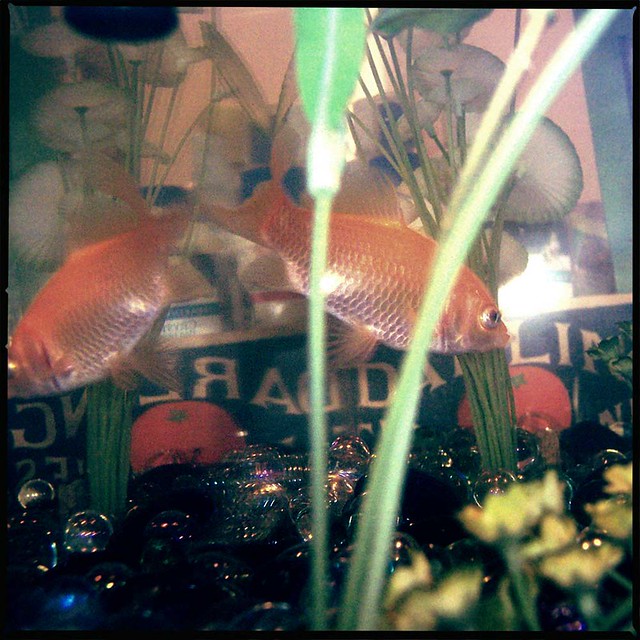 The fish weren’t fazed one little bit by me groping around in their tank. That surprised me. As soon as the plants were in, they started exploring them, and when they were done with that, they went back to scrounging for leftovers in the marbles. They’re awfully good fish.

Next, to procure a plecostomus. I think there’s probably enough algae and crud accumulated now to make a decent habitat for one. 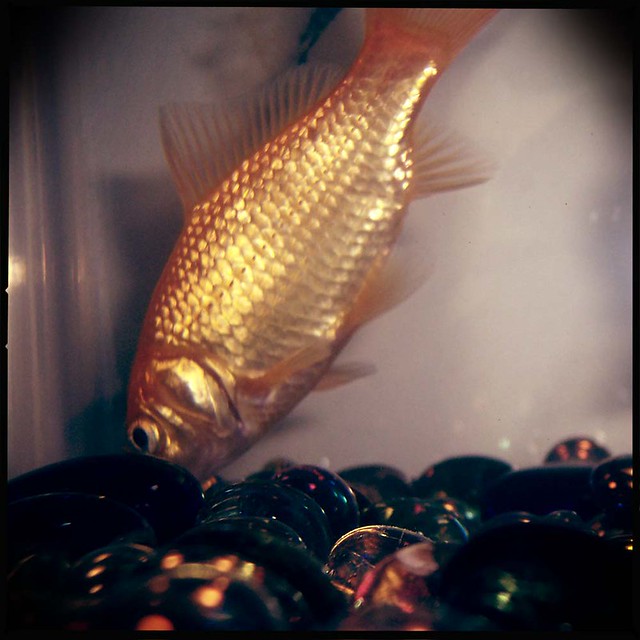 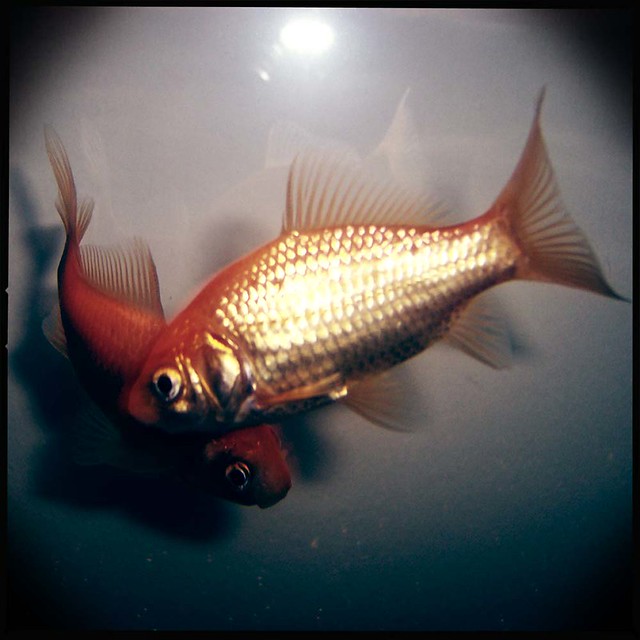 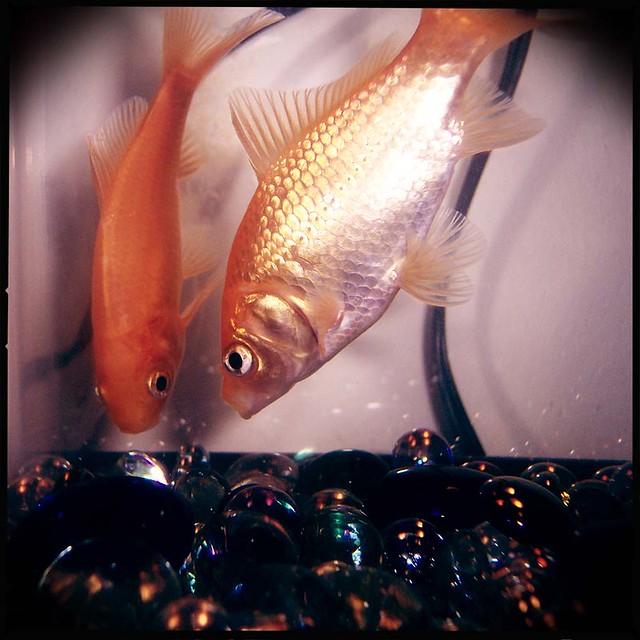 Goldfish (and some other types, as well) suck up small rocks from the bottom of the tank and spit them back out again. Carp are bottom scavengers, and what they’re doing is looking for leftovers. That’s great, if the aquarium has gravel at the bottom. I use glass marbles though, instead of gravel. That doesn’t faze the fish a bit. They don’t care that the rocks they’re hoovering up are as big as their heads. They try to suck them up, anyway, sets off a ruckus of plinking as they root around in the marbles and try to inhale them.

Anyway, that’s what they’re doing in the two heads-down pictures. They’d just finished their supper, and were scrounging around for leftovers. Plinkety-plink-plink-plink. 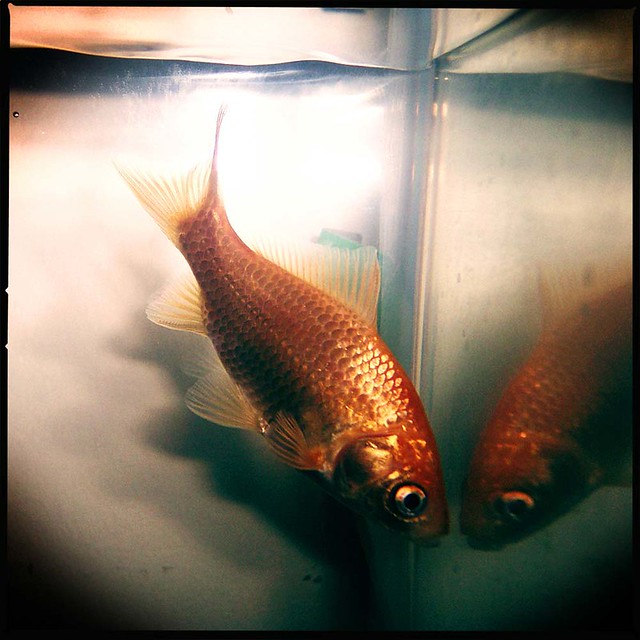 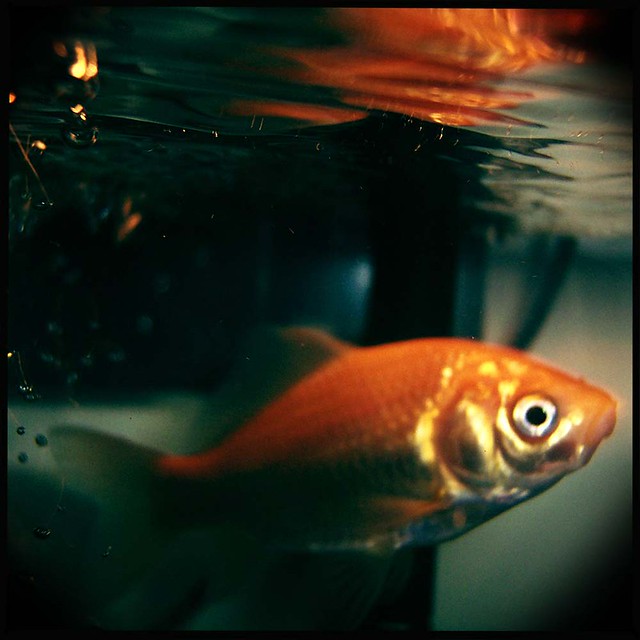 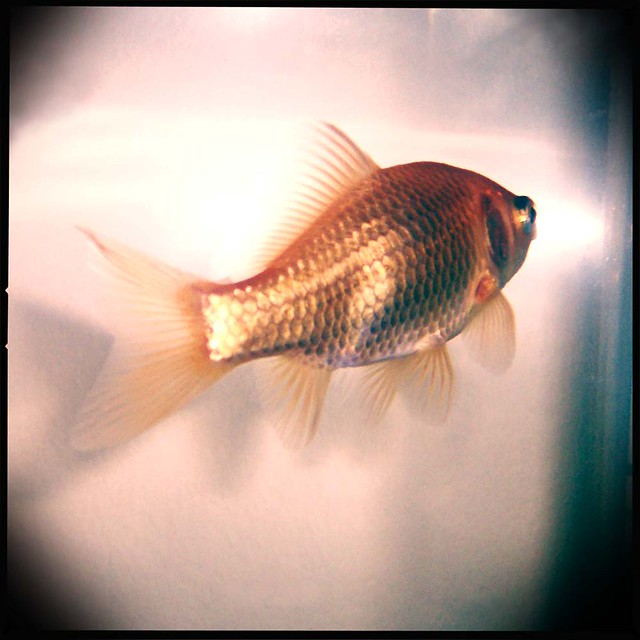 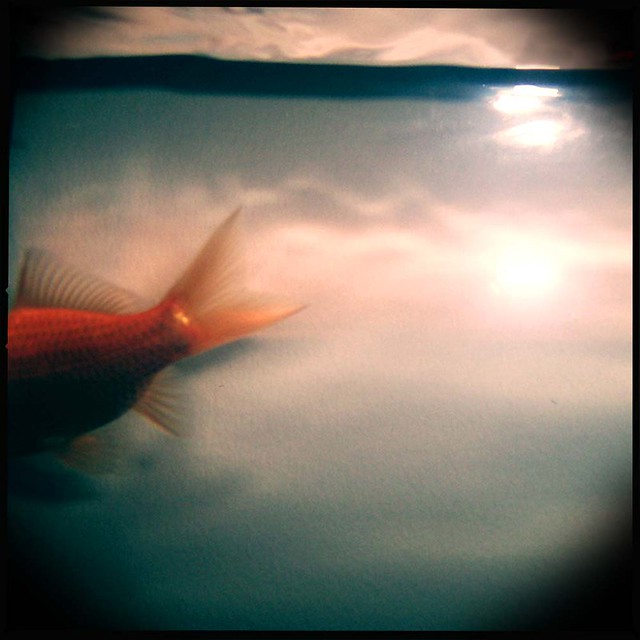 One of these days, I’m going to manage to get usable shots of them doing their gape-mouthed FEEDMENOW routine. They’re like two orange, aquatic piglets! Whenever they see me near their tank, they come to the front, near the waterline, to tell me their tale of never-been-fed woe.

It’s weird that I got several shots of just one of them alone, because they are usually joined at the, um, fin. They’re companionable, gregarious little guys.

I woke up to no floaters. Yay! Both fishies are doing beautifully. They are active little buggers and spend most of their time zooming around the tank. They zoom together, though, which is cute. They also know that people bring food, so when you approach the tank, they shoot to the surface for snax. And boy are they hungry! I don’t know if half starved fish will over-eat, so I’m not feeding them all that much yet. Last night, they were unimpressed with the short rations, so they started digging in the marbles at the bottom of the tank for left-overs. Since it’s a clean tank, there’s not anything down there for them to eat. The sound of marbles chinking against a glass aquarium is loud.

Also, I think I only was startled by the “Who the hell is peeing?!” noise of the waterfall filter five or six times last night. That’s going to take some getting used to. Poor Harriet. The first time, I yelled, “Hey!” at her, only she was lying quietly on the couch, not peeing on the kitchen floor. As if she’d do such a thing, anyway. How uncouth!

I just got back from Owen County, where I rescued two fish. Gold fish. The kind you buy for 39¢ each. They ended up costing me $50, by the time I bought an aquarium, non-toxic water, etc. Fifty damned dollars for two fish that probably would have been just as happy being dumped in the pond. But, they were abandoned a month ago, and I just couldn’t stand the thought of them being left to starve or smother to death. Not even boring old goldfish deserve that.

Hopefully the clean water won’t shock them to death. 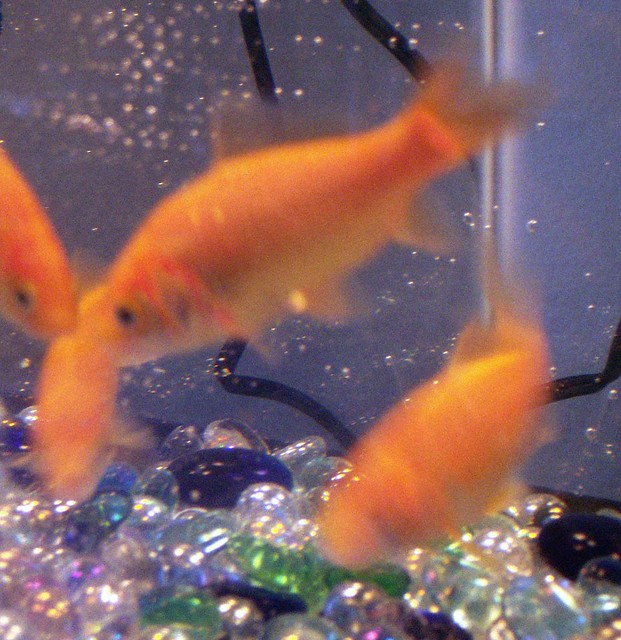 They were not very cooperative about having their pictures taken, so blurry orange blobs are all you get for now.

The same folks who abandoned the fish abandoned a puppy, too. I’m watching her this weekend, so I will most likely have pee-churs of baby puppy cuteness.