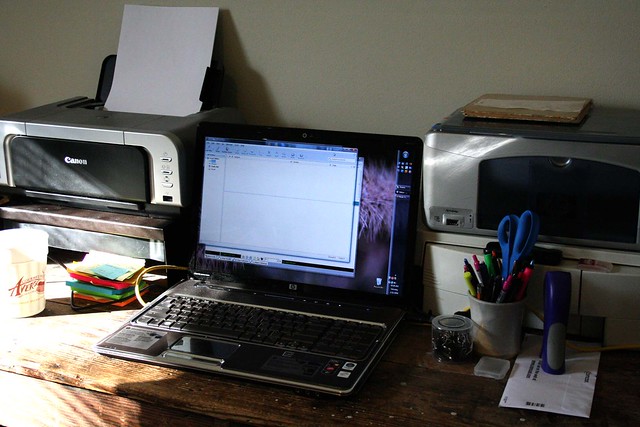 This is the only clean(ish) spot in my entire office/studio, onna counta needing a clean spot to set up Cracktop, but it’s a start. One of these days, I’ll actually sort through the ungodly pile of Post-Its. I have a feeling anything in that stack is probably useless, but I can’t just throw them away without looking.

And! I only did a quick tour of Photoshop CS4, but I think I’m in love. It’s nice and sleek and elegant, and even though a bunch of stuff has changed or been moved since PS6.0, everything is right where it needs to be. Nice!

(Oh, and ignore the two printers. The HP is a piece of crap and only functions as a scanner. The Canon, though, is quite nice. The ink isn’t waterproof, but it also doesn’t dry up if I don’t use if for months on end. I miss my Epson and its Durabrite ink, but not enough to invest in another one. The Canon is Just Fine.)

Before and After Cleaning

I always enjoy looking at people’s work spaces. I’m in awe of many of them. They’re neat and tidy and hummense. I live in a tiny house with no room for a studio. I prefer working in front of the television, anyway, so even when I had a nice, big studio, I didn’t use it much.

The first picture I took early this morning. I’d been up late working on something, so it was a mess (everything out of place, paper scraps on the floor, and evidence of my caffeine addiction littering the area). The second picture is the clean(er) verison.

Stacks of Junk and Collage Mania

I added these pictures to show the stacks of containers and drawers under the coffee table. I also thought I’d include a picture of the top of the coffee table. It’s a butt-ugly 1970s vintage maple piece that I inherited from a college roommate. Instead of replacing it with a nicer one, I decided to decoupage the entire top and paint the body. That was about 10 years ago (lordy, does time ever fly!). The decoupage has held up pretty well. I’ve had to replace a couple of areas because I’m coaster impaired and over the years cold beverages have sweat on it. The paint job is looking a little worse for wear, but since I use it as a work bench (note the hammer underneath it), I’m in no hurry to repaint it.